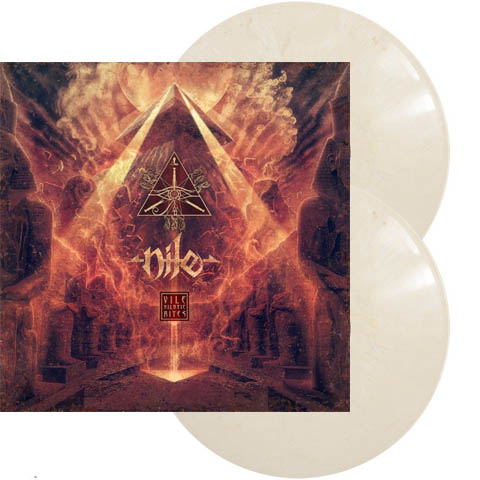 There’s death metal and then there’s Nile. For Vile Nilotic Rites, the mantra was: if it’s not right for the song, it gets cut. Nothing superfluous or idiosyncratic were allowed to persist on and live through Nile’s new team-based songwriting process. If a part was savage but didn’t fit, out the door it went. But if it was merciless and fit into the overall design of the song, it was kept and curated. The end result of Nile’s extreme musical vetting was 11 songs, sharp as obsidian blades, heavy as nine Nubian pyramids. Songs like Oxford Handbook Of Savage Genocidal Warfare, That Which Is Forbidden, Revel In Their Suffering, and the title track exhibit the self-made qualities of editorial perfection without losing the fiery passion that makes Nile’s death metal devastatingly uncontestable. Lyrically, Vile Nilotic Rites was inspired by and informed from Sanders scholastic interest in and understanding of Egyptian, Mesopotamian, and Levantine history. The title itself, however, pushes the proverbial felucca to Khartoum, but it’s not all academic, of course.

Track list:
1. Long Shadows Of Dread
2. The Oxford Handbook Of Savage Genocidal Warfare
3. Vile Nilotic Rites
4. Seven Horns Of War
5. That Which Is Forbidden
6. Snake Pit Mating Frenzy
7. Revel In Their Suffering
8. Thus Sayeth The Parasites Of The Mind
9. Where Is The Wrathful Sky
10. The Imperishable Stars Are Sickened
11. We Are Cursed