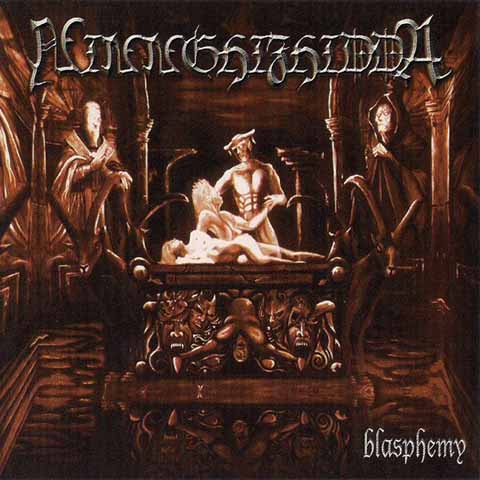 Founded in Recklinghausen/Nordrhein-Westfalen in 1997, German metalheads Ninnghizhidda started with the recording of ‘The horned serpent’, a 6 track demo which was the basis for the 1998 album ‘Blasphemy’, released through Invasion records and licensed to Avalon/Marquee for Japan. Provided with great reviews worldwide, ‘Blasphemy’ spread the band’s name as an ambitious and blasting new act, combining the trademarks of fast and furious black metal so far with classical arrangements of a soundtrack. The style of this band lies somewhere between Black and Death Metal, combining the technicality and vocal brutality of Death with the atmosphere and evil approach of Black. Ninnghizhidda are all about Satan and worshipping evil, but this is not primitive or crude Black Metal, oh no. Few bands in this genre have the musical chops or the ear for melody that this band has. They never try to impress with speed, but rather with dynamic and complexity. There is plenty of savage riffing here, and lots of devil-spawned screams of wrath, but still very melodic, and even furious tracks like both of the ‘Of Demons And Witches’ parts and the colossal ‘Baphomet (In The Name Of)’ bristle with killer hooks and spellbinding melodies. Rather than try and horrify everyone with their anger, these guys play real devil music that both assaults and seduces. Usually death/black crossovers mean black metal with a heavier production and deeper growling, but here the merging is much more complete and multilayered. Ninnghizhidda have melded the most enjoyable qualities of both genres to produce a sound as addictive as it is unique. If all you want from your metal is pure raw evil, then this will probably be too melodic for you. But if you favour the more atmospheric kinds of Black Metal then this album will be a revelation. This was reissued by Displeased records in 2003 with one bonus track. This however is the original since long out of print edition on Invasion records