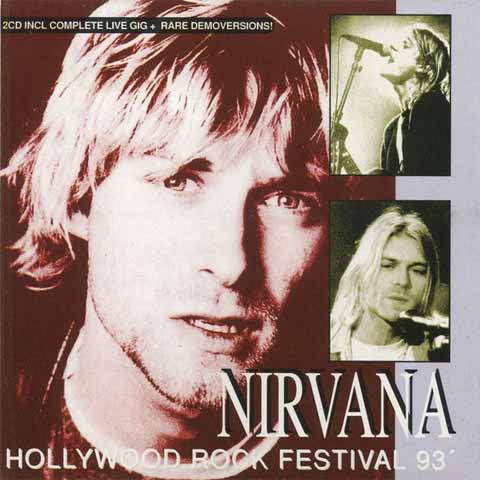 Reduced price due to cover and cds being vg

Hollywood Rock was a big rock n roll festival that was used to happen in Brazil every year. Since the Seattle bands were hitting the mainstream in the 90s, Nirvana, Alice in Chains and L7 were contacted to play 2 shows: one in Sao Paulo 16th and one in Rio 23rd of January 1993. Even with the media publishing lots of news about Cobain’s health being so bad because of his heroin abuse, the Brazilian crowd was really happy expecting Nirvana to play. L7 played before them and when Nirvana finally hit the stage it was real late but people were still there. You can hear the unbelievable noise of 30,000 people screaming around. Kurt was dressed in pyjamas, carrying his black and white guitar. The band started playing Theme For Carmen as an intro and then launched into School. During the bridges of the song, you could hear an already tired Kurt singing. The runs normal until Love Buzz when Kurt brings out a pack of cigarettes from his pyjama pocket and continues to sing the second verse while smoking at the same time. When the song is done they go silent for about 5 seconds. The audience stares at them, not believing in what was happening. Krist decides to say a few words at the microphone. He starts making a speech about hollywood cigarettes, cancer and the zodiac. What he didn’t think was that the audience could barely understand what he was saying. They answer Krist by clapping and yelling “Oh Oh Oh” constantly. Kurt jokes with Krist saying “I think Oh Oh means ‘shut up Krist!'”. Right after that, the band jams on ‘Possibilities’ with Krist on the vocals. Kurt smiles while Krist sings nonsensical words. ‘Lithium’ is the next song of the setlist. It is incredible, the feeling in the air during this song! A perfect kombo between the band and the crowd. Thousands of people singing along with Kurt, loudly as hell made this moment unique. As they finish playing, the crowd goes nuts screaming “NIRVANA! NIRVANA!”. Dave jokes by saying on the same rhythm “We don’t count, We don’t count”. I guess bizarre facts started happening after this. The band delivers a sarcastic marketing about Hollywood cigs and Krist talks in a sales voice. Kurt says something along the lines of, “When I’m in Diarrhea de Janeiro, I like to have the refreshing leaves of a palm tree. I can’t stop smoking man, I gotta smoke all the time. I’m a rock n roll star. And rock n’ roll stars put their cigarettes right – here,” and places the cigarette he has just lit behind one string. The funniest moment of the whole show occurs during ‘Polly’. Kurt changes the lyrics to, “Hollywood smoke is the smoke,” and then at the end he sings, “Let me take a drag of your cigarette.” It was totally improvised since Dave tried to do the backing vocals but when he realized that Kurt wouldn’t stop messing around, he gave up. When Kurt felt that Dave was about to stop trying singing, he smiled just like a messy child. About A Girl is played normally still sounding great. Nirvana are then heading into their breaththrough anthem Smells Like Teen Spirit when Flea, of the Red Hot Chili Peppers (who had just played the night before) comes on stage holding a trumpet. Yes, the band plays the song with Flea improvising a trumpet solo. Kurt is so high that he repeats the second verse instead of singing the third one. After it’s finished, the band retreats in for a break of one minute or so (though they were still on stage). Another time, Kurt’s highness can be ascertained when he plays the guitar intro of ‘Been A Son’ when actually, he was supposed to be playing ‘On A Plain’. Dave and Krist keep playing and Kurt does well to join the song. The band plays a 10 minute version of Scentless Apprentice where Kurt’s scream sounds like a mix of despair, deep pain, tiredness with a twist of a just-alive animal and he finish the song with an almost unlistable voice “Thank you, good night.” and the band leaves the stage. The then ends the set list with Territorial Pissings. After the last chord of the song, Kurt falls on the floor and play about 4 other chords. He leaves his guitar laying on the stage and gets off from there by crawling. What neither the audience nor the media knew, was that due to his withdrawals, Kurt had drunk a bottle of vodka and had taken a whole pack of Valium. He was totally screwed up. There are rumors that he went out crawling because he had lost all his strength to keep upright. Most people enjoyed the show for what it was but nobody had a clue about the shame and pain Kurt was feeling inside him for being an addict to that point. So overall the sound quality isnt that great but the band are joking around and theres a lot of things happening during the show which still makes it a must-have for Nirvana fanatics, which I assume would be the only people thinking of buying this album. But, if you are only interested in hearing polished, slick, live versions of Nirvana tracks, get Live at Reading instead. Hollywood Rock Festival will only be appreciated by true fans who can’t get enough of raw, unadulterated Nirvana. There are also 18 demo tracks added as a bonus