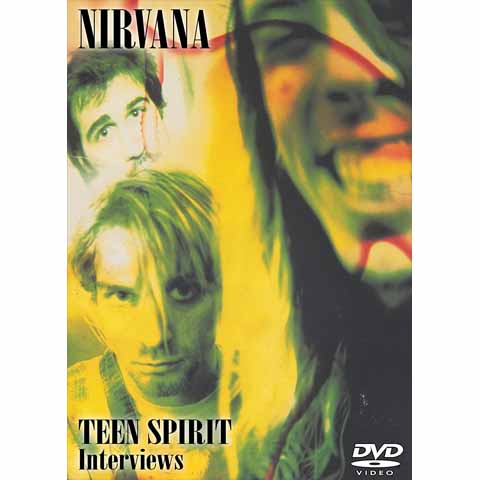 Nirvana – Teen Spirit Interviews is an 80 minute dvd that has a misleading title. This dvd really doesn’t feature that many old interviews with the band. The first 35 minutes is lifted from a mid-nineties MTV documentary presented by Kurt Loder. This tells the story of Nirvana from the early days up to the release of the Unplugged In New York album. Most of the music has been edited out, though there are many interviews here from Kurt Cobain and the rest of the band which were recorded between 91 and 93. This is followed by a 16 minute portion of a BBC series called The Seven Ages Of Rock, which was first broadcast in June 2007. Nirvana featured heavily in episode six Left Of The Dial. Again this dvd cuts out most of the music, but there are new interviews with band members Dave Grohl and Krist Novoselic, R.E.M’s Michael Stipe, plus archive interviews with Cobain. Next is a 13 minute interview with the band from 1991. To describe this as amateurish would be a massive understatement. It looks like a drunken student recorded it with a video camera in a dimly lit backstage dressing-room. Kurt barely says a word, Krist does all the talking which is mostly inaudible. Pointless but probably rare as hell. Then there is a very short TV interview from 1991 which captures the band in a good mood. The dvd ends with 7 minutes of low quality footage filmed by Krist Novoselic onboard an aeroplane. This serves no purpose other than to illustrate the tedium of touring. Nirvana – Teen Spirit Interviews feels like it was cobbled together quickly with very little care and for no other reason than to cash in on the huge popularity of Nirvana. However, this is a lot better than many of the other similar dvds out there – as this Nirvana dvd actually contains Nirvana. I have to say I enjoyed the first 50 minutes of this dvd. Kurt Cobain was clearly a one-off, and I always find what he has to say interesting. Long time fans, such as myself, have seen most of this stuff before. People who are new to Nirvana – who’ve listened to a couple of albums and want to learn more about the band, should check out this dvd.