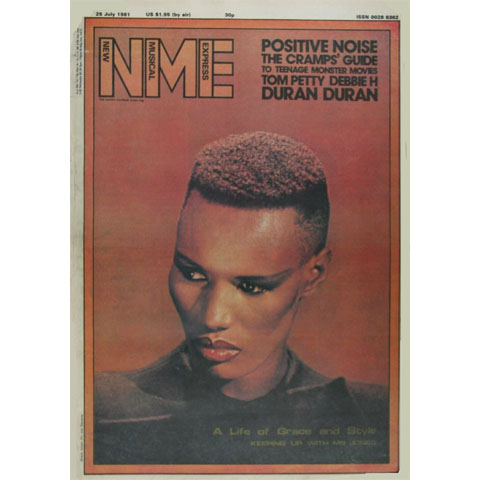 New Musical Express (NME) was a British music magazine that ran in a printed form between March 1952 to March of 2018. In the 1970s, it became the best-selling British music newspaper. From 1972 to 1976, it was particularly associated with gonzo journalism, then became closely associated with punk rock through the writings of Julie Burchill, Paul Morley, and Tony Parsons. It started as a music newspaper, and gradually moved toward a magazine format during the 1980s and 1990s.

This issue has 64 pages written in English and features articles or interviews with or about Grace Jones, Tom Petty, Duran Duran, Positive Noise, The Cramps, Thompson Twins, Lee Scratch Perry and lots more and then some cool advertisements for Motörheads Heavy Metal Holocaust Festival gig as well as the regular chart reports, album and single reviews, gig reviews from the English club circuit and of course the amazing advertisments for albums, concerts and tours.

Condition: NME was made in the same format and on the same paper quality as a normal daily paper and the pages were never stapled. So that means that probably all issues has tears, bent marks and skewed pages.