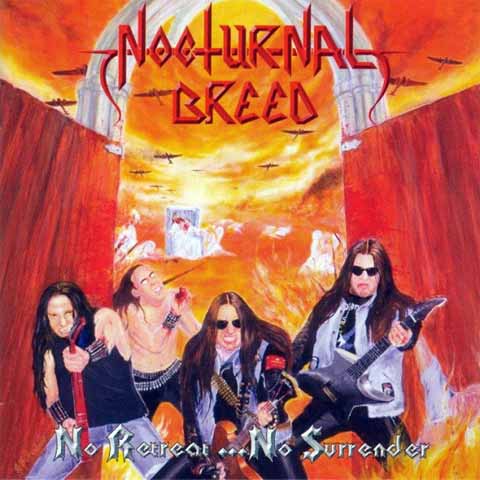 Near the end of the last Millennium, a feeling of unease started to grow within the Oslo underground scene. Thrash metal was back…and it was time to serve punishment where punishment was due. Nocturnal Breed was formed in 1996 by singer/bassist S. A. Destroyer (Gehenna/Satyricon) and guitarist Ed Damnator aka Silenoz (Dimmu Borgir). Within six months, demo recordings ‘Raping The Angels’ and ‘Black Cult’ were hatched, from which several tracks made it on to different compilations and the band signed a record deal. After a successful tour with Emperor and Bal Sagoth and a new drummer the band released their much acclaimed second full-length album No Retreat No Surrender. The music on No Retreat is not too far removed from early Sodom and Kreator. In fact, you could probably compare most of the songs here to those on Pleasure To Kill, although it is slightly less deathy. For the most part it is raw, fast Germanic styled thrash with some black metal overtones that the members weren’t able to shake all the way off. The lyrics are fairly typical of the aforementioned style, that is plenty of songs about war and Satan, although half the time, the vocals are incomprehensible, as one might expect from a black metal vocalist. All in all, the four members deliver every song in an energetic, no bullshit, evil manner.