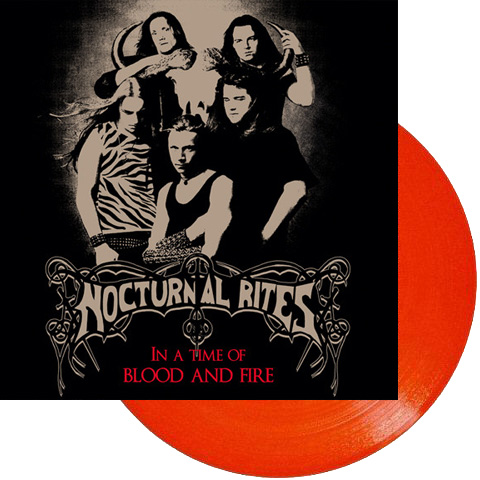 Nocturnal Rites -In A Time Of Blood And Fire lp [red]

Nocturnal Rites was born in Umea in 1990 as a death metal act that were trying to find their integrity in the underground scene. However, by the time Nocturnal Rites had released their first demo in 1991, everyone and their grandmother was playing this brand of metal to protest the new direction that Thrash was going. So soon after, Fredrik Mannberg realized that instead of being a member of an over-large group of death metal bands, it would be a better choice to do something that no one had been doing significantly for years, play melodic power metal in the NWOBHM style. ‘In A Time Of Blood And Fire’ is historic for many reasons. It came out in 1995 when metal was almost dead, bands like Iron Maiden, Metallica or any other 80s band or thrash metal band were going through their toughest times. Since the old gods weren’t able to keep their style bands like Nocturnal Rites were inspired to give the style of metal, that had been rejected for quite a while as old fashioned, a rebirth. The mix of metal that Helloween did on their ‘Keeper’ albums mixed with the best of the Nwobhm genre and you get that very thing that defines good heavy metal. For anyone that read about this album in a fanzine and bought it back in 1995 will probably remember how breathtaking it was. The songs themselves are very straight-forward in their structure, and function as a rather indicant combination of the speed and flash of Judas Priest, the melodic lines and interludes of Iron Maiden, and take no prisoners lyrical content of Manowar, and the energetic spirit of Motorhead. There are keyboards on here, but they are used pretty much for atmospheric effects and are not overly prominent. The only flaw in this album is that the production is slightly sub-par, but the strength of the songs almost makes this a non-issue. There are no bad songs on this album but it still went unnoticed at the time of its release and it would take another two years before Hammerfall released their first album before this kind of music was becoming popular again. Nocturnal Rites were among the first and they would continue to grow both music wise and in popularity when they hooked up with guitarist Norberg and singer Lindqvist. Now more than 10 years after its release and with a power metal genre that is just full of bands just copying each other it still feels that this is the album that started it all and it has what most other generic power metal albums lack nowadays. This is classic metal done the right way and it still gives me goosebumps. In conclusion, this is a power metal album that will have a lot of appeal to fans of traditional 80s metal, particularly NWOBHM.