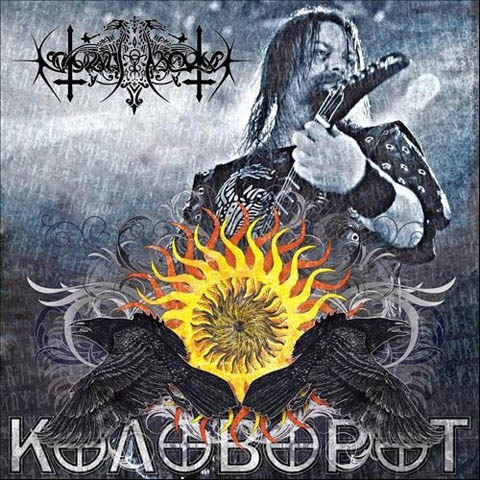 Only a minority of black metal bands survive beyond a few years. Even fewer do so by remaining at the top of their game, with all the power of integrity. Among these bands, we find Nokturnal Mortum, oldest Ukrainian black metal band still active, which in 2011 celebrated its twentieth anniversary. With a reputation capable of frightening a barbarian horde and irreducible fans, they offer us a reward similar to a treasure: a live album recorded at the famous pagan music festival Kolovorot. Over two hours of music, covering the band’s history. It invites us to an incredible journey into the world of pagan pre-Christian Ukraine. A blaring horn intro opens the ceremony, followed by traditional music that announces The Voice of Steel, taken from the latest album of the same name. Damn it is heavy! The rhythm section holds plenty of space and gives the listener a pleasant feeling of proximity. This is followed by Valkyria and Ukraine, always from the same disk. The execution is strong and the musicians spread out all their control, with pieces often complex and accompanied by traditional music. The crowd, often an unpleasant factor in live albums, here is well mixed. It appears in the opening of songs, but disappears for the titles. It continues with White Tower, atmospheric mid-tempo song, which concludes The Voice of Steel (2009). Time travel begins with In the Fire of the Wooden Churches, from the album NeChrist (1999). More direct, this song can provide a bridge between the different stages that mark the group’s existence. Always from the same album (but first recorded for the ultra cult demo Lunar Poetry), the show continues with Perun’s Celestial Silver, fast and catchy, with its flute accompaniment. It continues now it focuses more on the Weltanschauung album, released in 2005. Thus, the title track, The New Era of Swords and Hailed Be the Heroes are beautifully interpreted. Revisiting again their older albums, the band plays Kolyada, taken from Goat Horns (1997), which takes us back to the booming years of black metal, while the fury of Eastern Europe began to invade the rest the continent and started its world conquest. The curtain falls with Sky of Saddened Nights, which closes beautifully a show I would have damned myself for a chance to attend. I am not embarrassed to admit I’m a long time fan of Nokturnal Mortum, a group that has allowed the emergence of a Ukrainian black metal scene. It is remarkable that after so many years of setbacks, this band still reaches such a level of excellence. This live album is nothing but a pure delight