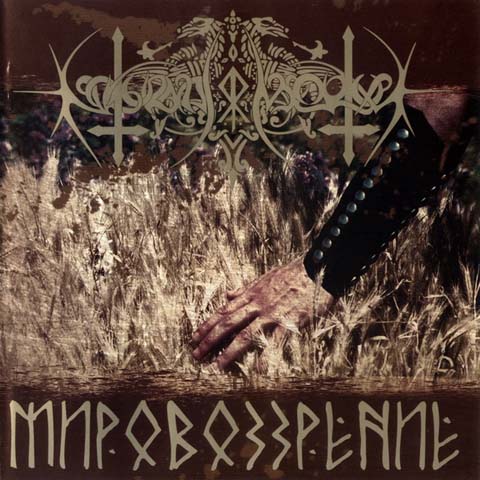 Nokturnal Mortums fourth full-length album and their first in six years. The album entitled Weltanschauung is a step in a new direction for Nokturnal Mortum who have seemingly turned their attentions to playing a more folk-inspired form of symphonic black metal. Consisting of fourteen tracks and lasting a staggering one hour and fourteen minutes, this is an album which needs to be listened to part by part, which is probably why Nokturnal Mortum have introduced as many filler tracks as they have with this piece. Something which is clear from the onset is that Nokturnal Mortum are relying a lot of Slavic folk music as an inspiration to their music. Much of this album has a very native Ukrainian feel to it. What with the addition of a variety of instruments it is easy to see where the inspiration has come from. As previously stated this album contains several interludes, or fillers. These are usually battle scenes, or some sort of ambient depiction of glory and battle combined. These aren’t like your usual fillers, they enhance the atmospheric and folk-ish sound to the piece in general whilst showcasing the beliefs of the band. These could been viewed upon as a waste of time considering the lengthier songs have introductions anyway, and because the lengthier songs do a good enough job of adding atmosphere and folk-inspired sounds. Nevertheless, i don’t think the listener sound take this into consideration as the longer songs do enough to establish this as probably the best Nokturnal Mortum release. This is the Slavic version of Weltanschauung sunged in Ukrainian released by Vargoths own label.