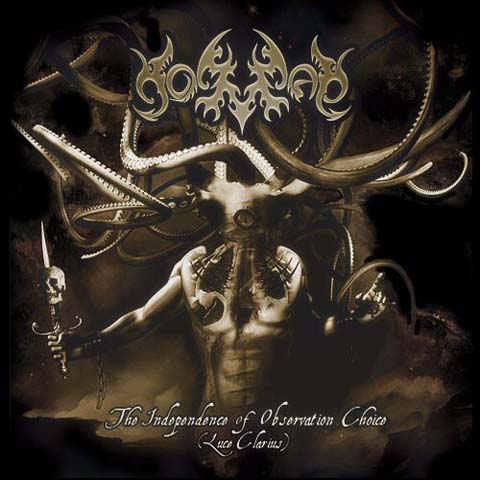 2009 re-issue with slipcase and one bonus track

Nomad is an experienced and well respected band since it was founded in 1994 and it has released three full length albums ever since. This Polish black metal band features members from Behemoth and Devilyn so you know youre in for some well performed high quality music. Their fourth album The Independence Of Observation Choice (Luce Clarius) was released in 2007 and it features some brutal death metal with satanic references in the lyrics and a general hellish atmosphere. Brutality, extremity, hatred and blackness can easily describe Nomads music. Everything is straightforward in Independence: sharp and dry guitars, blastbeats of top speed and diabolic brutal vocals. There are a lot of slower parts in every song though, making the flow of the lyrics even more intense giving a tone of ritual in their playing and just a few melodies that break the monotony of the endless beating. Some basic guitar tricks as intros or outros, some movie narrations and several sounds that have to do with death (bells, screams etc.) make things even more interesting and the record goes on without tiring the listener. It is easy to compare the band with their countrymen Vader as they have many things in common although Nomad is less thrashy and more into death metal in its blackest and rawest form. The members in Nomad know what they do so if youre into some Polish death metal then check this out. Not recommended for soft ears and sensitive souls.

Track listing:
1. Liberation-intro
2. The Slanderer
3. Dies Irae (The Day of Wrath)
4. The Independence of Observation Choice
5. The Well of Sorrow-intro
6. My True Home
7. To Burn at Dawn
8. The Last True Words of Christ-intro
9. Im Waiting for the Wind
10. Rotten Song-intro
11. Funeral on the Scaffold of Dreams
12. IX-Bulldozer cover
13. In Love-Grave cover