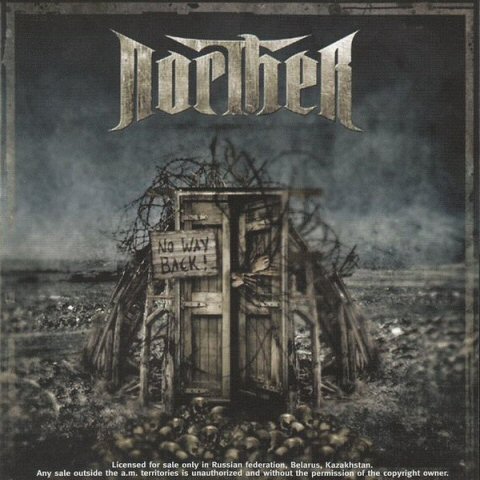 Norther -No Way Back mcd

No Way Back is quite ironically titled, as it embodies what is essentially the final creative gasp of the group’s original line-up. Although it can be envisioned as a stylistic precursor to the 2008 full-length N, it actually only features one track that appears on the aforementioned album. Most of the material here seems to hearken back to Death Unlimited, with a similar atmosphere summoned thanks to the greater presence of Planman’s keys and a thinner guitar sound. The songwriting is surprisingly enterprising on both the title track and “Reach Out”, which both blow anything the band released afterward out of the water in terms of both creativity and subdued aggression. The inconceivably immature “C.U.S.” actually rivals some of the heaviest cuts from Till Death Unites Us and features a very impressive main riff. This version of “Frozen Angel” features a few inconsequential differences compared to the album version, but still remains a catchy, soulless stab at mainstream attention. “Close Your Eyes” showcases some passable clean vocals courtesy of Ranta, but layering them over Lindroos does little to enhance their already limited appeal. So No Way Back has its value not only is this material superior to anything the band put out after 2006, most of these songs don’t appear on any other Norther release. Stylistically, these tracks fall in line with some of the group’s best work, so I would be a fool to tell fans to ignore it, especially in light of what came afterward.