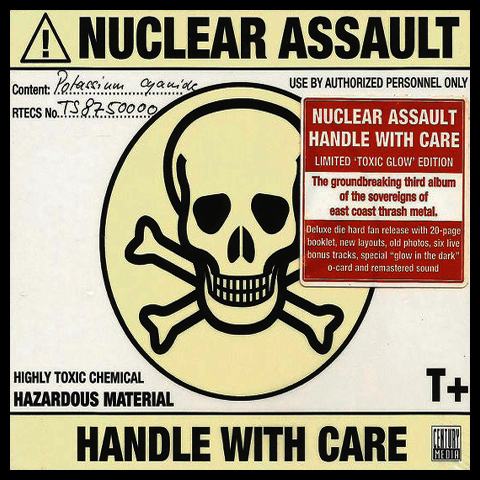 Nuclear Assault truly arrived on 1989’s Handle With Care — a record which stands the test of time as one of the East Coast’s best offerings to the thrash metal genre. The development displayed on their previous effort, Survive, was honed to an even tighter focus here, resulting in the band’s best and most powerful album. Outstanding thrashers like “Critical Mass,” “F: (Wake Up),” and “When Freedom Dies” lead the way with the same bile and fury fans had grown accustomed to. But the band also displays an increasing appreciation for melody and straight-ahead metal riffs on tracks like “Inherited Hell” and the epic “Trail of Tears” — no doubt upsetting those who preferred the rawer hardcore elements in their sound. And even though John Connely and Danny Lilker remain the band’s prime creative forces, drummer Glen Evans also contributes some killer material (“Emergency” and “Search & Seizure”), making Handle With Care Nuclear Assault’s truest band effort. Too bad this only presaged the splintering which would occur on 1991’s disappointing (and appropriately titled) Out of Order. (Lilker’s insistence on including pointless noise bursts spanning mere seconds, like “Funky Noise” and “Mother’s Day,” didn’t help matters any.) Still, Handle With Care is a perfect introduction, and definitely the must have of the Nuclear Assault albums.