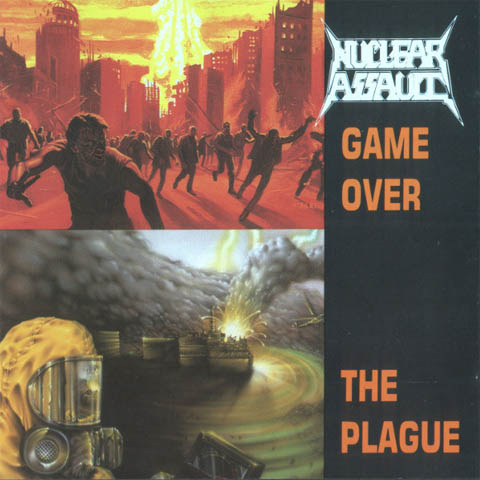 Rare American Combat Records cd release that features the albums Game Over and The Plague.

By the time they recorded their first album, Game Over, the members of Nuclear Assault were already seasoned veterans of the N.Y.C. thrash metal community — and it showed. Their songwriting and overall vision might still have been lacking a few components, but at least their performance and execution revealed a remarkably tight unit. A couple of generic, satanic thrash metal lyrics (“Sin,” “Stranded in Hell”) notwithstanding, the band’s paranoid fixation on nuclear warfare (“Radiation Sickness,” “After the Holocaust”) and interest in politics and social issues (“My America”) are evident from the get-go. And while these headbanging highlights gave the kids something to think about, the brilliantly hilarious “Hang the Pope” (which would fit perfectly into any South Park episode) gave them something to laugh at as well. Finally, after the unrelenting beating imposed by the group’s frenzied pace, the slightly more restrained “Brain Death” closes the album in fine fashion, and may have been its best song were it not for three or four mostly disposable minutes of endless riffing. The Plague The Plague is not much different from Nuclear Assault’s debut except for a heavier guitar sound and generally better production. The music is not quite as wild and unrestricted as on its predecessor, though, therefore it may not catch your attention in the same way although the result is definitely not weak. The album is probably best known for the controversial Butt-F**k (which is simply a hilarious piece and safely labelled You Figure it Out on most CD jackets), which is dedicated to Motley Crue singer Vince Neil’s notorious car crash. The impression of this mini album is still more of a sequel than a truly independent piece of work, the songs sound rather similar to each other while they still have a typical stamp of quality on them as you could expect from Nuclear Assault. Maybe this release is not as groundbreaking as Game Over, but The Plague is still worth checking out especially if the band’s general style appeals to you.