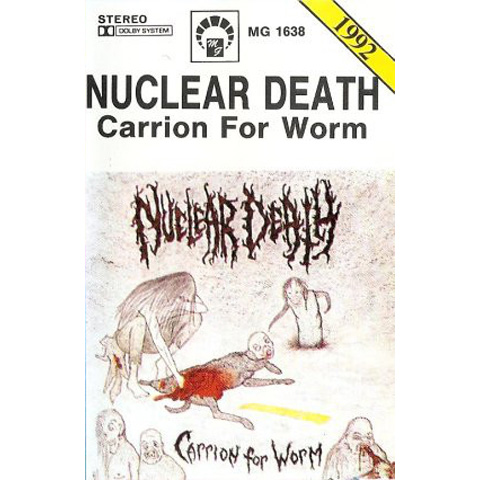 Arizona-based Nuclear Death is one of the few thrash/death metal bands to feature a female vocalist, Lori Bravo (who also doubles on bass, and is joined by guitarist Phil Hampson and drummer Joel Whitfield). The trio originally formed in the mid-’80s, issuing several demo cassettes before releasing these two albums (Bride Of Insect and Carrion For Worm) on Wild Rags records in the beginning of the 90s. Their debut Bride Of Insect featured some Death/Grind metal similar to Carcass, Dr. Shrinker and Repulsion. On Carrion For Worm the band took a different approach then on their debut. The main focus is bass and plenty of it. Ranging from the extremely down tuned guitars, deep vocals, erupting bass guitar, and pounding drums, Lori even decided to use much more grunting deep vocals mixed with exploding screams. Rather than previous screamish yells mixed with hellish falsettos. In a way they actually fit the musical direction the band is going for on this deep sounding album. One of the main focuses of this album is the guitars which sound very down tuned. This is an overall very creative album and if death/grind is your game then this might live up to your expectation.

Track list:
1. Spawn Song
2. The Human Seed
3. Proposing To The Impaled
4. Moribund
5. Greenflies
6. Return Of The Feasting Witch
7. A Dark Country
8. Lurker In The Closet: A Fairy Tale
9. Cathedral Of Sleep
10. Homage To Morpheus
11. Carrion For Worm
12. Vampirism