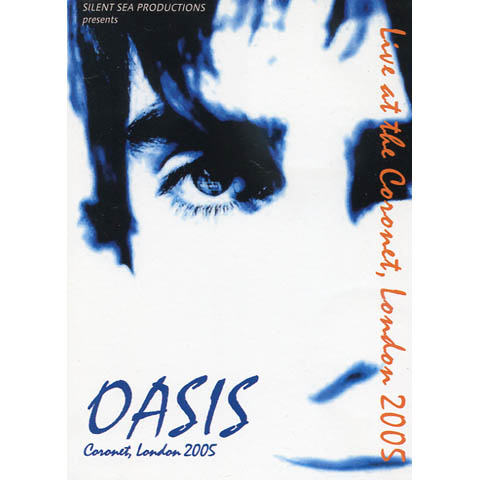 Filmed at the Coronet in London on the 25th of May 2005, the fourth of five intimate UK club shows to road test Oasis new album was an interesting one to say the least. There was lairyness in the streets. A fight or two threatened to kick off in several of the pubs on New Kent Road. The traffic was heavily congested with angry bus drivers honking and tempers flaring. No I’m not in Istanbul I reassured myself. The Coronet venue looked as shabby as its south London surroundings. Inside though, it looked much more like 2 million had been invested to turn a dumpy old cinema into a slick, carefully designed new venue. The house lights dimmed and Oasis began terribly with Turn Up The Sun barely a clunky drone under the PA but it was quickly remedied as Lyla and Bring it On Down followed. For the first time, in a long time, Oasis really looked up for it. Liam growled, snarled and fist-pumped like the early days, as opposed to the sober straddler many saw at Glastonbury. Noel was having fun too as he duped us into the chord of Cigarettes and Alcohol, before ploughing into Morning Glory. Smiling at the Italian pair in front of him, he couldn’t resist dedicating Stop Crying Your Heart Out to them. The PA had soon been tweaked to remarkable perfection, with Liam virtually the same as on record, along with the added gravitas of his live presence. Of the new material, the Kinksy Importance of Being Idle and punky Meaning of Soul went down best. The classics obviously dominated and it was naturally left to My Generation (which is wearing now boys) to end proceedings. This current incarnation of Oasis certainly seem to have found some harmony, even if Zak “Ringo” Starkey is yet to be made a permanent member. There was much smiling and larking about onstage. Indeed, just as they have regained their mojo on record, Oasis have rediscovered the excitement of performing live, which they are to take to the half a million people lined up to see them in the next few months. And it’s better late than never.