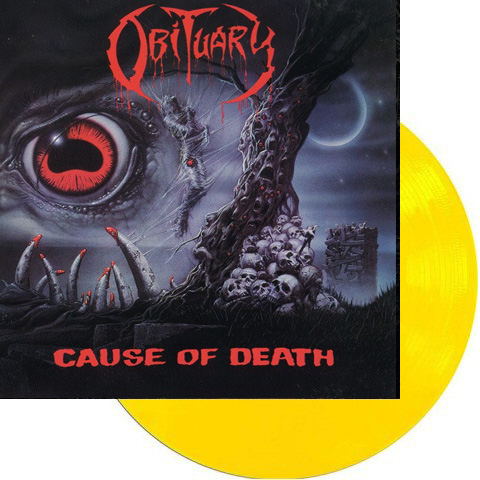 Lead guitarist Allen West didn’t join Obituary for their second album, Cause of Death, which makes a bigger difference than you might expect. His replacement is a close associate of the band, James Murphy of the band Death — the man many consider to be the godfather of death metal — and he brings his own style to Cause of Death, resulting in an album that sounds like a hybrid of Obituary and Death. This isn’t necessarily bad; in fact, it’s somewhat fascinating, especially for metalheads well immersed in the Florida school of death metal. You can hear Murphy’s influence throughout the album, as he often leads the band into eerie dirge-like moments that sound like the eye of the storm at hand. Murphy’s contribution to Cause of Death aside, not much else has changed in the year since Obituary’s 1989 debut, Slowly We Rot. The vocals of John Tardy still dominate the proceedings, the drastic tempo changes still set Obituary apart from the majority of their peers of the time, and producer Scott Burns still struggles with seemingly low-budget values that actually sound worse than they did on Slowly We Rot (not in a good, lo-fi way, either). The band’s songwriting — handled almost entirely by Tardy, rhythm guitarist Trevor Peres, and drummer Donald Tardy, with the exception of a Celtic Frost cover, “Circle of the Tyrants” — has become a bit more progressive (perhaps because of Murphy’s influence), as several songs top the five-minute mark (none did previously, averaging a couple minutes less per song) and take more twists and turns than before. These slight differences certainly distinguish Cause of Death from its landmark predecessor, and you can quibble about which approach is better, as many fans have and always will. In the end, Cause of Death is still a great album for its time. Remember, this is 1990 — still way at the dawn of death metal. And though Obituary would make big strides forward with The End Complete in a year and a half, Cause of Death is nonetheless an intriguing album, especially from a historical perspective. It’s not one of the band’s best, but it’s definitely one of their most interesting and, along with Slowly We Rot, their most distinct.