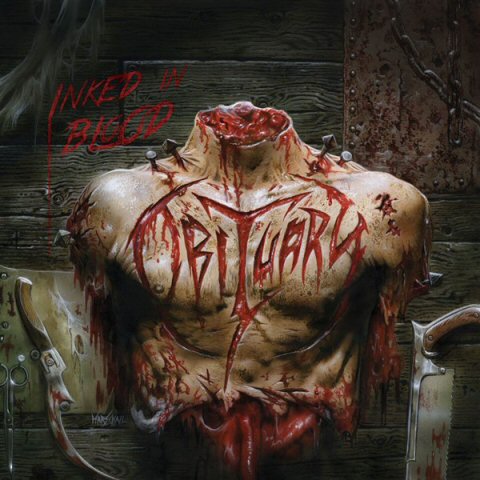 The 2014 Obituary sounds like a cross between World Demise and Back From The Dead to me, with similar guitar tone and a heavy emphasis on slow, crushing death metal. At times crawling and plodding, at times grooving relentlessly, Obituary hasn’t abandoned their well-known low tempo approach to heaviness. But they also infuse more speed on Inked in Blood than I’m used to hearing from them. Whether going fast or slow, Obituary, as they always have, can still crank out one catchy-as-hell riff after another. The fast songs are really good, but my favourites on the album are the slow crunchers. Definite highlights are Violent by Nature, Pain Inside, Inked in Blood and Deny You. Even though the riffs are simple, they’ll get you banging your head and stomping your feet a little harder every time you hear them. In a way, Obituary is like the Ac/dc of death metal. They have a knack for making the most basic riff sound heavy and catchy, the songs always sound just like Obituary, and they take forever in between albums, so I think it’s a pretty good comparison. There’s good variation on this one between slow, super slow, mid-paced, and fast material, so I’d say it measures up to the bulk of their catalogue. The fastest tracks are Centuries of Lies and Minds of the World and Violence has a nice up-tempo groove. As you’d expect, John Tardy’s vocals sound like they have venom dripping right out of every word. Just as vicious as ever. All in all, I think this is a worthy Obituary album, and I would think any fan of theirs would love it. We’ve all come to know what to expect from this band, and they deliver it like champs on Inked in Blood. The only complaint I can see people making is that it sounds a lot like their other albums, but if you haven’t gotten used to that by now, you’re probably not into them much anyway and wouldn’t have much use for their new release. But I don’t think it sounds at all stale, and even if it rehashes some old riffs or ideas, it sounds awesome to me. And in the end, that’s really all that matters.