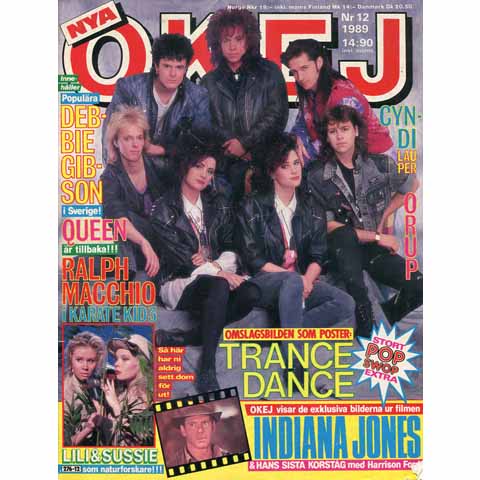 Subscription sticker on back cover

Okej magazine was a music magazine published in Sweden between 1980 and 2010. It was started by former Poster photographer Hans Hatwig and by 1984 it was the best selling magazine in Sweden with and it sold 156 000 copies and was read by 500 000 teenagers – by almost everybody of the target group. The success was total. The magazine has now reached a legendary status in Sweden and all who were teenager back in the 80s loved it. No matter if you loved the upcoming brutal thrash trend with Metallica or sweet Swedish boybands like The Pinks or were into TV-series like V, Fame and so on, Okej had it all. During the 80s the magazine had features on the meat throwing act W.A.S.P., topless pictures of Samantha Fox, Kiss, Twisted Sisters, Madonna and so. Reading these old magazines are nothing but a nostalgic trip down the memory lane. The magazine lost is glory in the early 90s and in the new millennium it was more a gossip magazine and the last number was issued in the fall of 2010 before CEO of Egmont declared the magazine dead on the 21st of January 2011. But by then nobody really cared.