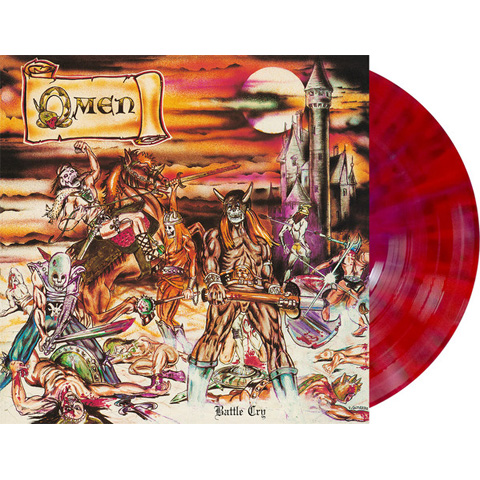 Many up-and-coming American metal bands of the early 1980s wished they were Iron Maiden, but few came as close to achieving the feat as Los Angeles’ Omen with their debut album from 1984, Battle Cry. Although it was also obviously fueled by the nascent acceleration of thrash (look no farther than raging opener “Death Rider” for that), the album’s steel-bound heart was unquestionably pumped by New Wave of British Heavy Metal blood: from the gritty staccato riffs and pounding war-drums, to the predominant fantasy themes and anthemic choruses gracing such enduring standouts as “Dragon’s Breath,” the title track, and the heartfelt love song (well, not really) “Be My Wench.” True, probably none of the songs on Battle Cry stood out for true originality or groundbreaking invention; but it’s pretty nigh impossible to remain unmoved by the fist-pumping, head-banging passion (not to mention red-hot fretwork from guitarist Kenny Powell) behind the likes of “Die by the Blade” and “Bring out the Beast” — and that must count for something. Heck, even over-the-top closer “In the Arena” is still completely irresistible, no matter a true-blue metal head’s age or cynicism; suffice to say Ronnie James Dio would kill to have written it! And yet, because their subsequent albums arguably never matched this first one’s consistency, time has not been as kind to Omen’s memory as that of, say, the overrated Metal Church, the often ludicrous Manowar, or even well-deserving label mates Armored Saint. But, for fans of classic American heavy metal looking for a guaranteed mid-80s delight, there’s little chance of a letdown from this release.