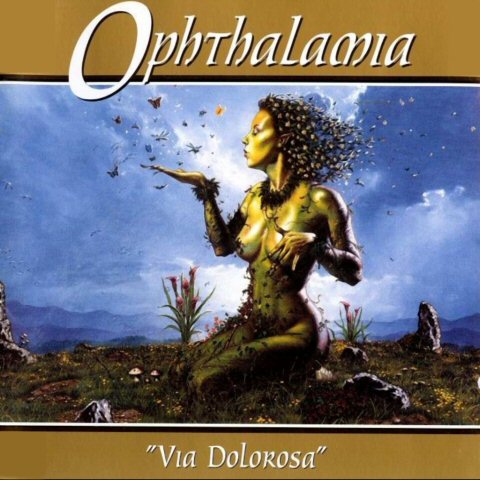 Ophthalamia is a fantasy-world created by IT. The Goddess of this world is the woman with the demons, called Elishia. IT has also created the surroundings of Ophthalamia (I guess that the shores of Kaa-Ta-Nu are a part of this world, as the sea of Ragiih-Nib and the moutains of Makubu-Keen are), the land’s creatures and a language for Ophthalamians. Ophthalamia first started in 1989 and their second album ‘Via Dolorosa’ is a spiritual journey (and 13 station real trek) that a Christian takes to re-walk the steps Jesus took on route from Pilate’s judgment hall to Calvary, and I think, in contrast, that the title is a fitting one due to the lyrical content focusing mainly on journey, discovery, mental awakening, and sacrifice. All members of Ophthalamia are well-known for their other activities on the Swedish metal scene and here they are, collaborating with each other in a pretty good way. The line up on this album is:

Track listing:
1. Intro / Under Ophthalamian Skies / To The Benighted
2. Black As Sin, Pale As Death / Autumn Whispers
3. After A Releasing Death / Castle Of No Repair (Part II)
4. Slowly Passing The Frostlands / A Winterland’s Tear
5. Via Dolorosa / My Springnight’s Sacrifice
6. Ophthalamia / The Eternal Walk (Part III)
7. Nightfall Of Mother Earth / Summer Distress
8. Outro / Message To Those After Me / Death Embrace Me (Part II)
9. A Lonely Ceremony / The Eternal Walk
10. Deathcrush-Mayhem cover