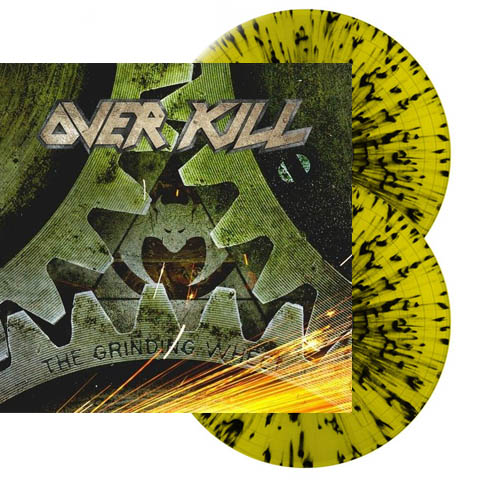 Us press. Double album on splatter vinyls with gatefold cover and one bonus track. Limited 1000 copies

Some thirty seven years into their career, Overkill show no signs of taking it easy. It seemed that maybe they might be slowing down slightly on their previous album, White Devil Armory, but that’s all in the past now. Clearly they were just taking a run up for this, their eighteenth studio album, which is a punky, attitude filled riff-fest from beginning to end. For all of you with short attention spans, I’ll say right now that if you haven’t heard anything by Overkill before, this is a great place to start. If you’re a veteran fan, you will love this album too. There you go, that’s time saved on reading the whole review that you can use to add it to your basket. For everyone else, stick around and I’ll tell you just why it’s so good. It seems Overkill can’t be discussed in any forum without the word consistency coming up. It’s with good reason, of course, as throughout their history they’ve barely dipped in quality. In fact, it almost feels unfair that Ironbound is referred to as their comeback album, coming as it did after a string of other quality releases. One wonders exactly what they’d done wrong prior to that for it to be labelled a comeback. What’s remarkable, though, is that The Grinding Wheel isn’t just a solid album – it’s one of their best. Better than Ironbound? Yes. Better than the massively underrated Wfo by Overkill? Yep. Better than the mighty, seemingly unassailable Horrorscope [Explicit]? Well, don’t lynch me for this, but yes. Yes, it’s better than Horrorscope. The Grinding Wheel is up there with their very best releases, and I’m including my personal favourite, Feel The Fire in that. Opening with second single (the aptly named Mean Green Killing Machine), the pounding war drums of Ron Lipnicki kick things off before everything else piles in. The rhythm section of Overkill has never sounded better than it does over the course of this album, and kudos to Andy Sneap on a typically wonderful production job. DD’s bass sounds like it’s trying to crawl into your very soul on a number of occasions. The third single (which I don’t seem to be allowed to say the name of) is next, and it’s a rapid fire assault, full of spitting vocals and group shouts. This one is sure to start pits the world over. Our Finest Hour (also quite appropriately named) follows it. I initially thought this song was only okay when I first heard it with the accompanying lyrics video, but actually it works better on the album, where you’re not reading the chorus lyrics repeatedly as well as listening to them. Aside from the singles, the rest of the disc is packed with gems. Listening to the album, you can really hear the DNA of everything that goes into making Overkill the band they are – there’s the Maiden-esque galloping opening of The Long Road, which could almost come from Feel The Fire. The opening riff of Come Heavy is the sleaziest they’ve ever sounded, and this Sabbathy number wouldn’t sound out of place in an Orange Goblin setlist. The Grinding Wheel doesn’t lack insanely catchy numbers too – Let’s Go Down To Hades will now sit proudly alongside the likes of The Fight Song, Old School and Ironbound in their back catalogue. To put it simply, there’s a bit of everything here, without the album losing cohesion. The Grinding Wheel is Overkill firing on all cylinders . It’s a no holds barred, in your face, attitude packed, snarling thrash attack, and if you don’t add it to your collection, you might want to check your pulse.