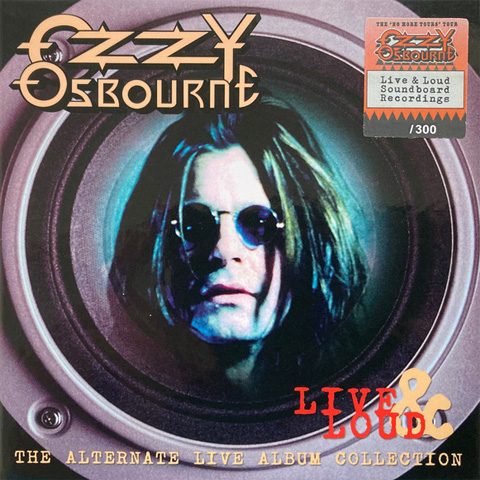 The story as a rock n roll madman started back in the 60s with Black Sabbath and then he was the king of heavy metal in the 80s and he introduced us to a bunch of young and new guitar players that all would be amazing and with their own style. Im talking about Randy Rhoads, Jake E. Lee and Zakk Wylde but in the early 90s he felt he had done it all. He had just released No More Tears, one of his best albums ever and he know felt it was time for a final tour. So he headed out on the No More Tours in 1992 and the tour was going to be a celebration of this long career. In 1993 he released a live album from the 1991-1992 No More Tours called Live And Loud and it was a fun album but it didnt say where it was recorded and it wasnt recorded in one place but included several different recordings from several different places and dates so this is where this magnificent box set steps in. Here you have 8 discs featuring 4 fine shows from the 1992 USA tour. All of them taped as they were without overdubs or studio tricks. The shows are Altanta on the 5th of August, Miami on the 14th of August, Orlando on the 16th and Ohio on the 20th of August. So two busy weeks in Ozzy career and you can follow it here. Here you have Ozzy’s hyper vocal, Zack’s powerful guitar work and Mike Inez and Randy Castillo’s rhythm section and also Kevin Jones’s were added on keyboards to this tour. The first show has audience cheering which were lacking on Ozzy previous live album Speak Of The Devil in 1982. The second show from Miami has less audience noise and Ozzy does a great job but the star this evening is Zakk Wylde. He has a fantastic sound and he rush to play Desire in his heavy version and makes Mama Im Coming Home feeling warm and Road To Nowhere feeling powerful. If you adore Zakk Wylde then I would say that this Maimi show is the Zakk version of Live And Loud. The third show which is from Orlando feels like its the main recording for the official Live And Loud because if you compare the two it sounds like many of the songs from this Orlando show were chosen to be on the Live And Loud album and its a good reason for it as this night was one of better ones on the tour. The final one from Ohio is also worth owing as it has a great mixing between the band and the fanatic audience. Ozzy also does an emotional version of Goodbye To Romance. The recording this night ran into trouble on Crazy Train so that song is incomplete but the soundboard guy seems to fix this in time before the next track. Ozzy and Zakk Wylde fans should own this box. Its great to get the chance to hear all shows that were later cut and pasted into one live album.