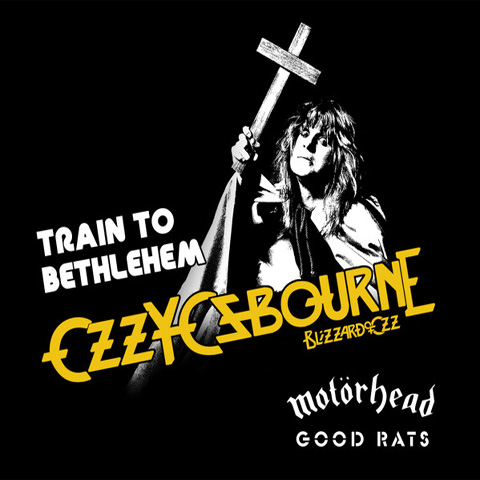 There was a taper in the 80’s who operated in the Western New York are that used decent recording equipment and was every bit the archivist as many of his recordings feature both headline and opening acts. This release comes features an evenings worth of music from The Stabler Arena in Bethlehem, New York on the 26th of April 1981 featuring Ozzy Osbourne on his first solo tour plus opening acts Motorhead, who were also playing America for the first time, and Long Island Rock act The Good Rats who’s early 80’s line-up featured future Kiss guitarist Bruce Kulick. The recordings of all three acts fall into the very good range, they are clear enough so instruments can be heard in the mix yet there is some distortion and boominess from the arena acoustics and like many 80’s recordings, the sound is a bit thin.

The performance by Motorhead is what we would expect, a full frontal assault. The band was certainly a relatively unknown act in the USA at this time, touring in the time between their seminal releases Ace Of Spades and No Sleep Till Hammersmith, their set is a pure joy to listen to. Opening with Ace Of Spades it is loud, brash, and a complete assault on the senses. The response from the crowd after the song is complete silence, the band respond with the excellent Stay Clean, afterward you begin to hear some cheers as Eddie asks for equipment adjustment, they hammer out Over The Top, an album B-side of the Bomber album. Lemmy then gives specific instructions to the audience, telling them to get out of their seats and come down to the floor in front of the stage, he demands an audience. A song dedicated to their drummer Phillip Taylor comes next, The Hammer is simply bludgeoning and finally they begin to get the response they want, Lemmy says “See that’s much better your having much more fun down there aren’t ya?”. The band gets deep with an early single Leaving Here and Jailbait is introduced as being about her, obviously a young female Metal head is down front. Great version of one of my favorites Capricorn, certainly the mellow song of the set complete with a heavy wah pedal solo from Fast Eddie. Two more from Ace Of Spades follow, Bite The Bullet and The Chase Is Better Than The Catch, Lemmy thanks the audience and they finish with the excellent Overkill, the song ends in a haze of feedback while sounds of a Bomber plays on the loud speaker, incredible set.

The Good Rats get the actual opening spot and play a short 35 minute set, the announcer introduces them Ladies and Gentlemen from New York, Columbia recording artist The Good Rats and like Motorhead there is very little response. Being the opening act there were certainly not a lot of people in the 6,200 seat arena. Their sound is very much early Eighties Hard Rock, kinda remind me of Sammy Hagar and Y&T a bit, solid high energy music and obviously accomplished musicians. Nice to hear some Bruce Kulick, he gets in some really nice leads, always enjoyed his playing with Kiss and he shines in this recording. The band get good reaction from the crowd, certainly what they would expect from a Rock band, quite unlike Motorhead who certainly blew some minds. I did notice that there is a little bit of digital static at track changes, curious as I detect none during Motorhead or Ozzy’s sets.

The recording begins just as the lights go down and the mics are positioned as the crowd cheers, then Carmina Burana is played over the PA system, the band hit the stage with I Don’t Know, the set list is standard during this tour and this concert is early in the run of dates. The playing is really nice, while there is a bit of high end distortion in the recording you can really hear the detail in Randy’s playing and his effects used. There is precious little video footage of him with Ozzy but he plays effortlessly and this is easily the case here. Crazy Train is played almost non stop afterwards, the band is very tight and obviously well rehearsed, the band convinces early. Ozzy introduced Believer as being from his new recording that would be released later in the year, Rudy’s bass thunders, Tommy’s drums pummel and Randy’s guitar is so heavy, really love these early live versions of the song. The tempo sounds slightly slow and the recording speed may be off by 1 or 2% yet Randy’s solo sounds right, his playing is really incredible especially during the solo’s during Mr. Crowley. Ozzy is also in fine voice and actually hits some high sustained notes in Mr. Crowley that kinda shocked me. Ozzy gets the crowd to do an impromptu cheer between songs, not getting the response he wants he tells the guys to squeeze their balls harder, he then introduces Flying High Again to no fanfare, the audience would not know the unreleased material. Ozzy mumbles the introduction to Revelation (Mother Earth) as the band begin, the interplay between Randy and keyboard player Lindsey Bridgewater is really nice, this song is unique in the Ozzy catalog all due to Randy’s playing that seems more like English Progressive Rock than Heavy Metal. He adds a lot of small flourishes that accentuate the music, never overpowering it, the Gothic feel is dark yet beautiful certainly influenced by Randy’s studies in classic music theory. If Revelation is darkness, Steal Away (The Night) is pure light, just pure Rock and Roll, the song segues into Tommy Aldridge’s drum solo, there is a cut at the 41 second mark due to a tape flip. No Bone Movies is another all out Rocker, certainly the subject of dirty movies is near and dear to their hearts, the tape speed sounds better after the tape flip, I wonder if the batteries were changed or if it was a tape issue. Randy Rhoads is featured during Suicide Solution, he gets his solo spot that is short and sweet, he makes ample use of his spot to showcase his incredible playing. The last two songs of the set are from his Sabbath days beginning with Iron Man, it’s widely report Randy wasn’t a fan of the Sabbath material but you would not know it from his playing, he breathes new life into the material, especially Children Of The Grave which (as usual) smokes with energy. The band are locked in and just go for it, Randy’s solos are spectacular and differ during the early 1981 to later 1981 and into 1982, a bit of improvisation from the young master. A tape pause during the encore break leads to the band returning to the stand for the final song, you guessed it Paranoid. The sound is a bit different, less distortion and way better bottom end yet slightly muffled as a result. Paranoid is really good (i know it’s getting old) again it’s Randy who really brings it, he sounds like he wanted to keep going in his solo but the band pulls back the reigns, very well played concert. Ozzy and Randy together and also the fact that this title includes rare sets by both Motorhead and The Good Rats make this title a no brainer.