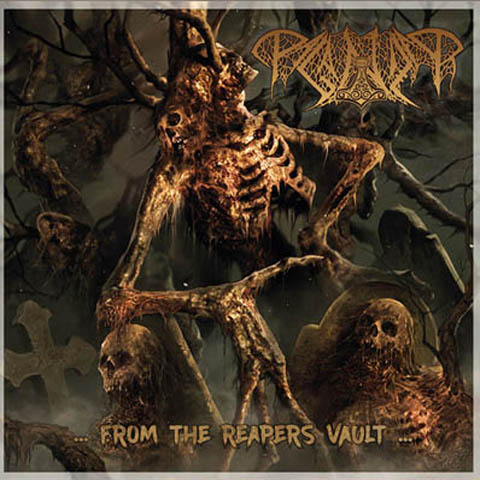 For more than 25 years Paganizer have well walked their own path in death metal, shaping an own sound based on their influences from the birth rising era of death metal. From The Reapers Vault is a 14 track compilation that takes you through several periods of the band. The line-up may have come and gone through the years but the core member Rogga Johansson hasnt changed his style of playing with all these chunky and heavy riffs that pays homage to the gods in Grave, Entombed, Autopsy and Asphyx. But Rogga has no fear to speed things up and venturing into a punky crust mood or borrowing some grind riffs from Napalm Death. But no matter what the origin of the riff might be its still old school death metal and its carved out in a way over the years that has given Paganizer a sound and a personality of their own. Featuring tracks made at different studios on different equipment at different times with different producers sounds like it has to come out like quite a mixed bag but it doesnt. All tracks have received an excellent brand new mastering from Savvas Betinis of the legendary Greek progressive death/thrash metal band Acid Death so all tracks has been given a new life and feels very smooth and well balanced for being a compilation album spanning material from 25 years. Fans of quality death metal should be satisfied with this album and Paganizer fans who owns all the old material should be pleased to hear this new mastering of some of their favorite tracks