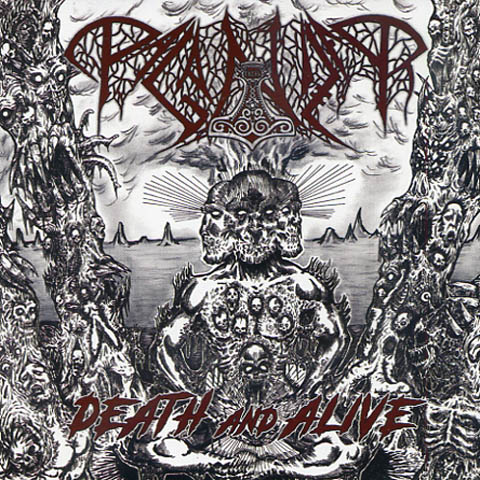 Paganizer is probably the Swedish death metal-mastermind Roger Rogga Johansson most famous act. Starting as a four-piece in late 1998 with the intent of playing old school death/thrash metal. Where their debut album Deadbanger was more thrash metal things quickly moved into pure death metal with their second album, Promotion Total Death, in 2001. Old school death metal written with inspiration from the legends of the scene in homage to the genre we love. Death And Alive starts with 3 studio tracks that previously has been released on other albums. So the real highlight here is the 8 tracks recorded live at the Metal Battle festival in Tannheim, Germany on the 18th of May 2012. Paganizer did a short German tour with Goregast dubbed the Gore-Ganizer Carnage Tour in the Spring of 2012. When they arrived in Tannheim to perform at the Schwarzer Adler club they were joined by two more acts; Bitterness and Revel In Flesh to make this a real death metal evening. Not many of you have experienced the Swedish warmachine Paganizer live so here a great chance. Dont miss this. According to Rogga himself only 50 copies were made of this album