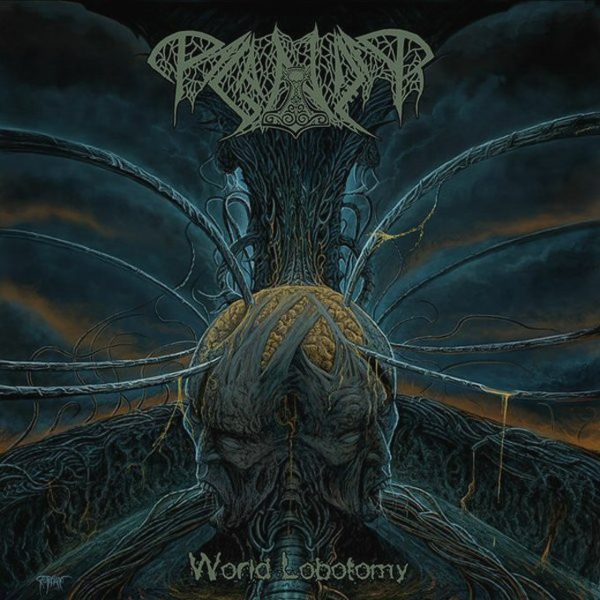 Paganizer is probably Rogga Johansson’s longest creation. They have been infesting on a raw merging of Swedish Death Metal along with various elements of Thrash and “World Lobotomy” is a result of a psychotic mind, a rapture of demise, in order to shock and disgust. Fancied a lust dance of Death? You shall have it, get ready to puke some gore and brain tissue. This album, as the previous others, is a maniacal fest of gruesomeness, sharing allegiance to the early 90s of Death Metal, particularly the quadrant of Scandinavia and The Netherlands, where European Death Metal flourished in that exceptional golden age. “World Lobotomy” explores that traditional Death Metal boundaries with fast paced riffing along with chugged palm muted strokes of mayhem, vulgar bass twitches, a bombardment of double bass drum assaults and guttural vocals (yet quite understandable thanks to Johansson’s vocal mastery). As you will probably notice, Paganizer is not different than any other band of the same characteristics. Like most bands of the kind, Johansson and crew are highly talented and experienced, providing a showcase of fine technical skills on producing such madness. Their intro song ‘Prelude to the Lobotomy’ starts with an ominous piano piece, which descends into discord and then you hear it. The sound of drilling. With headphones on, it’s as though your entire skull is being broken into by some mad doctor. As soon as you’re pared open sufficiently by the unknown driller, the title track blasts into you with the force of surgery without anaesthesia. The guitars shred and tear at you like they were bone saws going for your exposed flesh, and Rogga Johansson’s voice simply delivers blunt force trauma to your ears. Nowhere is safe from Paganizers death metal attack: it’s just that brutal. Dennis Blomberg’s chugging bassline begins ‘The Sky on Fire’, a menacing backbeat to the relentless guitar assault that hammers in with a jackhammer’s ruthlessness. Just as soon as the last growls die down, ‘Mass Of Parasites’ steps up and delivers another dose of crushing, howling metal that makes you set your jaw in a show of angry defiance. This is death metal of the finest vintage: drink deep and listen well. ‘As Blood Grows Cold’ builds on what has preceded it and snarls at you like an enraged beast from the Jurassic Period. ‘Ödeläggaren’ (which I’ve found out is Swedish for ‘Desolater’) follows the carnage, and is a minute-long blast of grind core, a suitable nod to Napalm Death and Nasum with a twist of Paganizers own brand of aggression. ‘You Call It Deviance’ is strewn with pinch-harmonics and Jocke Ringdahl’s masterful and punishing drumbeats: it’s a heavyweight track that threatens to choke you out with its sonic savagery. If you feel the need to take a breather or relax, there’s no opportunity for you to do so as the final tracks of the album are all storming, surging offerings of death metal, filled to the brim with bloodthirsty riffage and boiling, angry lyrics. Each one elevates the anger scale to near maniacal levels, until ‘Hunt Eat Repeats’ closes ‘World Lobotomy’s proceedings with a suitably brazen, brash rush of drum blasts and guitar shrieks. The Swedish quartet’s ninth album is an old-school death metal blast that would look great in any metalhead’s collection. Put it on, strap yourself in and let the surgery commence.

Track ist:
1. Prelude To The Lobotomy
2. World Lobotomy
3. The Sky On Fire
4. Mass Of Parasites
5. As Blood Grows Cold
6. Ödeläggaren
7. You Call It Deviance
8. As The Maggots Gather
9. Trail Of Human Decay
10. The Drowners
11. The Last Chapter
12. Hunt Eat Repeat