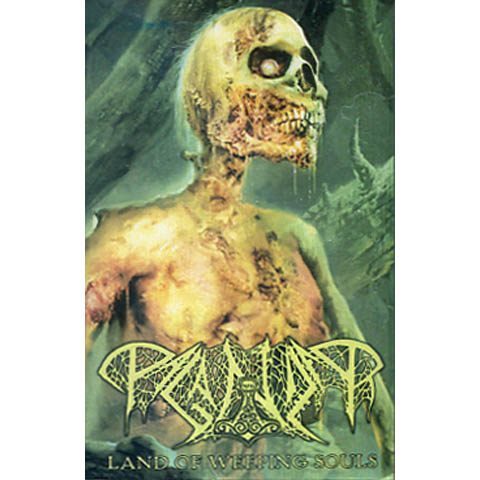 Paganizer -Land Of Weeping Souls/On The Outskirts Of Hades MC

To say Sweden’s Paganizer is heavy is simply the understatement of the year. Any record whose opening track is entitled, “Your Suffering Will Be Legendary,” and pulls it off with even more brutality than expected, has achieved top status in my mind. Paganizer’s music is most certainly old school, harkening back to early 90s Grave and Necrophobic. Land Of Weeping Souls is massive in scope and epic in vision, largely due to the music itself, which sounds obvious, I know, but not a lot of bands can pull this off the way Paganizer does. While a lot of musicians might try too hard, overshooting the mark, even overthinking the music, Paganizer gets it. They understand the schematics of death metal, they’ve done their research and it shows on this record. Vocalist/guitarist Rogga Johansson sums it up best when he says, “…the new album is the best Paganizer album, death fucking metal the way it is supposed to be done.” The man is right. Land Of Weeping Souls is an impressive slab of aggressive, hook laden, sickness the way death metal was meant to sound. You need this record. It’s a juggernaut of all that is heavy.

Track list:
1. Your Suffering Will Be Legendary
2. Dehumanized
3. Forlorn Dreams
4. Land Of Weeping Souls
5. The Insanity Never Stops
6. Selfdestructor
7. Death Addicts Posthumous
8. The Buried Undead
9. Soulless Feeding Machine
10. Prey To Death
11. Angry All The Time
12. Adjacent To Purgatory
13. The Netherworld Carnivale
14. On The Outskirts Of Hades
15. Forever Zombie
16. Scavengers Of The Undead