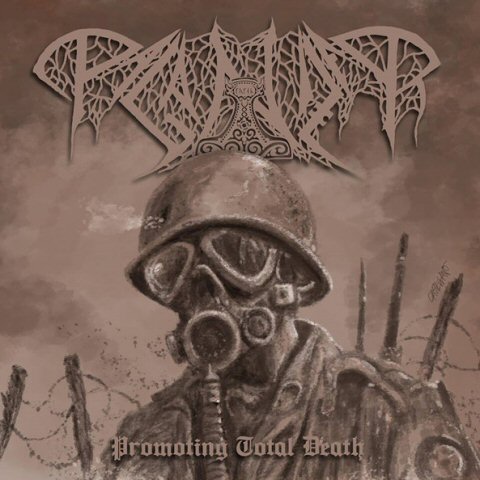 Paganizer founding member, vocalist and guitarist, Rogga Johansson, has had his hand in a seemingly infinite number of bands, from the traditional Swedish Death homage Ribspreader, to Gothic Death Those Who Bring The Torture, to the Progressive/Melodic death act Dead Sun, and then there is his solo work, released under his namesake and that’s just the tip of the Death Metal iceberg, as he has been involved with about 40 different bands over the years! You could probably say that Paganizer is where his attention is rooted, as 1999’s Deadbanger album is Johansson’s first official release, and the consistency in output outline his dedication to the project. Their second album Promoting Total Death was a critical moment in the creation of their brutal, straight-to-the-point Swedish Death sound. Bands like Carnage, Grave, and Dismember had a clear impact on Johansson’s style, as the band plays a groove-oriented, doomy attitude-driven Death with hardcore punk influences. The album, originally released in 2001, came at a time when Melodic Death Metal was reaching its high water mark, and its influence is easily heard on the album, with a song like the title track and album opener coming out with an attitude similar to that of Kataklysm, but less breakdown-centric than those acts and many more were during this time period. “Brutal Way To Die” is reminiscent of the catchiness of early Bloodbath, and its effectiveness in creating a sing-along chorus with a hardcore beat makes it a wonder why Paganizer never truly broke out into the mainstream. “Only Ashes Remain”, comes through with a strong hardcore influence, with a dual death growl and fry scream chorus, and an added intensity that puts it firmly in the realm of classic Death Metal. It’s that dichotomy of melodic mainstream sensibility and hardcore Death that make this one of those indefinable albums that appeal to a wide swath of metallers. Johansson, who is credited solely with vocals on the album, is pitch perfect and uniform in his intensity, transitioning seamlessly between gruff death growls to shrill screams, often layered on top of each other to great effect, like in the verses of “16 Seconds Massacre.” Probably the most well-rounded song of the bunch, “All Hope is Dead” is nuts and bolts Swedish Death with a rolling tremolo picked open and a building intensity that pays off in a Slayer-esque breakdown and a rare exotic lead solo from F. Pettersson along with some excellent drumming from Matthias Fiebig. The re-issue comes with two bonus tracks, “Skinned” and “Bloodneed,” which are raw but nonetheless nice additions, as the latter track shows off Johansson’s penchant for Progressive Metal in the vein of Dark Tranquillity or In Flames. Listening to the album now is interesting, as we have seen many, many bands play this style in the years since it originally came out, so it’s a credit to Johansson and Paganizer that they foresaw this trend, and along with Dan Swanö’s Bloodbath, which released their debut in the same year, it marked a renewed interest in the classic Swedish Death Metal sound, with Paganizer’s unique melodic interpretation of this extreme genre resulting in a brutal and landmark release that we’re still revisiting to this day. So that’s something, right?