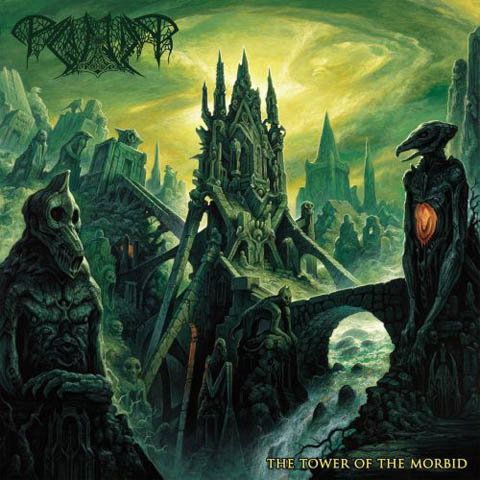 Paganizer -The Tower Of The Morbid cd

Rogga Johansson belongs to the rare breed of musicians that is so ridiculously prolific that his artistic output seemingly defies the laws of physics. The 2019 album, The Tower Of The Morbid, is definitely the heaviest one the band has ever released. Sounding definitely more modern than your average old school death metal band would, but not in a bad way at all. There’s crisp in the distortion, effective sharpness in the drumtone and vocals are clearly audible, only to demonstrate the Rogga’s trademark growl in full effect. If their previous album Land Of Weeping Souls had a bit of a crust punkish drive to it and the Scandinavian War machine back in the day flirted even a bit with semi-melodic riffs, The Tower Of Morbid is pure murder with a mallet throughout. It seems that Rogga got all the melodic matter out of his system with the tremendous solo album of his released earlier the same year. The Tower Of Morbid surely does come across like the brutal counterpart to it. And when you think of it, these two releases paint a highly comprehensive picture of what Rogga’s music is about. Scandinavian death metal that refuses to lick anyone’s butt and ignores trends in an almost stubborn fashion. He can pull out a catchy melody whenever he wants to, or go to that Massacre mode of early death metal and churn those pick up truck death tones, suitable for a Florida swamp or the dusty roads of the Swedish countryside alike. This is what majority of his music is about and The Tower Of The Morbid is no exception.

Track list:
1. Flesh Tornado
2. Apocalypse Writings
3. Cannibal Remains
4. Drowning In Sand
5. Redemptionless
6. They Came Only To Die
7. Rot Spreads
8. Beneath The Gauze
9. The Tower Of The Morbid
10. Purge The World
11. Demented Machines