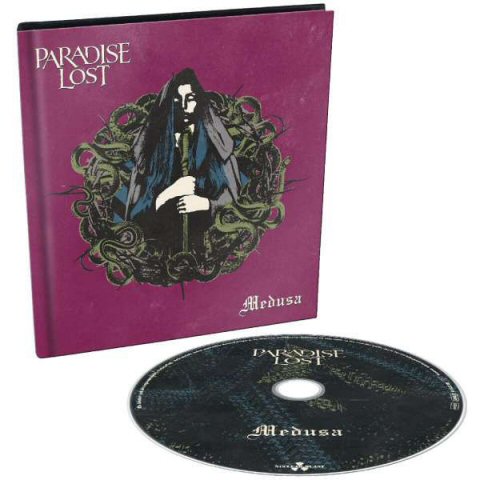 Paradise Lost 2017 album “Medusa” is their heaviest album in years. Guitarist Greg Mackintosh says: “I would probably say it’s our heaviest album to date, really, partly because of the way the songs are written. Also, partly, because of the production. The production is very kind a bit of a throwback production in a way, and also very organic. It’s basically the mics recording everything, no editing, no nothing. It’s very much a doom metal album. We had a very clear idea of what we’re doing before we even started writing this album, which we don’t normally have. Normally, we start writing and see what happens. But with this record, we had a very clear idea that we wanted to do a doom metal album. And, it just worked that way. The first song on the album is eight and a half minutes long and our label, when we told them we wanted to put it first, they were a little apprehensive because it throws people into the deep end. It’s not as immediate as maybe as some of the previous albums, but I think it’s a grower. That’s the whole point to me. But yeah, it’s very heavy, very doom metal. It can be quite eclectic in parts and there’s a range of vocal styles and a range of different musical styles on there.” Nick Holmes is also back with some growling vocals which Gregs says, I was pushing for it a few years ago, I was pushing Nick to try some of that vocal style out again. He wasn’t interested in doing it. But then, when we started this kind of songwriting that we do now, it gave me kind of the impetus to build it for him. He would give me little passages. Then if I could make it fit really well to whatever I was doing, then he’d have to say, ‘Yeah, you’re right. This is really working.’ I wasn’t really pushing for it, but I like to have that at my disposal, if you know what I mean. So if a part demands something like that, you already have it there and you can use it in your palette. I think that’s the way this album went, it became heavier and heavier as we were writing it. The gruff vocals were the thing that was working the most on a lot of the passages.”