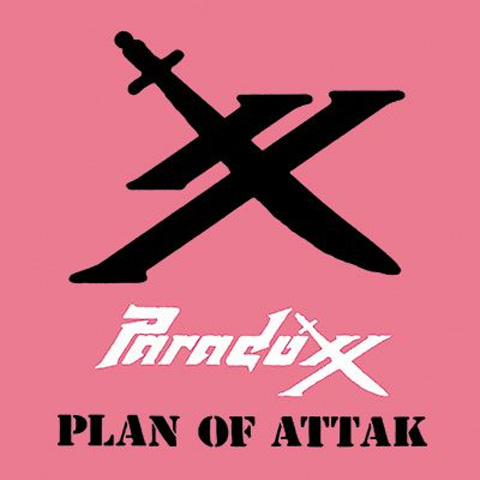 Limited 100 numbered copies signed by the band. One tab mark on cover

Considered to be The Holy Grail by numerous hard rock fans the world over, Paradoxx’s Plan Of Attak is seeing its very first OFFICIAL cd relase on FnA Records, twenty-eight years after its inception. In the mid-eighties, Paradoxx was a quickly rising band from Chicago with growing legions of fans. During this period, Paradoxx entered Sound Summit Studios (Lake Geneva, Wisconsin) with the intention of releasing their very first EP entitled Plan Of Attak. The album was recorded and pressed (albeit in a very limited quantity to start off with), but what would happen next is what gives this recording legendary status. There was some sort of problem or error with the pressing, and the band only picked up 50 copies from the plant due to the error. The band handed out most of the copies they snagged to friends and family, while the rest of the copies were scrapped/destroyed by the record plant (A small handful of copies were mailed out as promos). That’s it! Only 50 copies survived the initial pressing – the album was never available at retail outlets or at the shows and was never repressed. The extreme rarity of the album has led to original copies of the album fetching anywhere between one and two thousand dollars ($1,000 – $2,000) on internet auctions. Back in 1985, after the Plan Of Attak vinyl debacle, Paradoxx trudged on playing packed shows and winning over fan after fan. Guitarist Gary Vermette eventually left the band and was replaced by Dave Shankle who would eventually go on to play with Manowar. Shankle along with the Paradoxx boys would record the song Night Ryder which was featured on the Chicago Class of 85 compilation and another track ironically entitled Plan Of Attak (but not featured on the original pressing of the 4 track vinyl of the same name), are both featured here as bonus tracks. This first official reissue however will almost be as rare as the vinyl as the band wanted to press just 100 units for the fans at the Thirsty Whale Reunion of 2013. The music has been remastered within the limitations of not having the original master reels, along with new artwork, true to the original vinyl pressing. The album is numbered and signed by the band