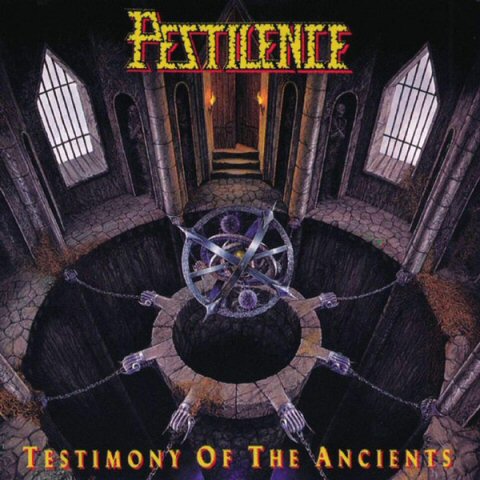 Pestilence ‎–Testimony Of The Ancients lp

After the raw power of influential predecessor Consuming Impulse, Pestilence returned with the more sophisticated death metal machinery of Testimony of the Ancients. Forced to compensate for the departure of bassist/lead throat Martin VanDrunen, guitarist Patrick Mameli took the reins — both vocally and songwriting-wise — and constructed this odd-for-the-death-metal-community high-minded concept record tackling strangely philosophical, and oddly compelling, subject matter (in a nutshell: a man seeking enlightenment succumbs to nefariously evil, ancient powers). Mameli publicly discussed his boredom with one-track-mind death metal and, along with like-minded American counterparts Death, pushed to redefine the genre’s traditionally guttural borders. Musically, Testimony is given a soundtrack-ish element with the insertion of short, story line-enhancing instrumental/sound effect tracks between each song, and clean production values mesh with the group’s more technical approach this time around, the musicianship solidified by highly respected session bassist Tony Choy (of Cynic and Atheist). As expected, Testimony is littered with quick-stop tempo changes and memorable, high quality death/thrash riffs, most notably on the doomy lurch of “Twisted Truth” and the disjointed, cascading riffery of “Prophetic Revelations.” However, it’s the ultra-melodic passages of “Presence of the Dead” and “Stigmatized” that counterpoint Pestilence’s precision brutality, therefore cementing the album’s themes: Harmony vs. chaos, melody vs. brutality, the concept of eternity vs. the limitations of a man’s mind. Whether or not the record is an across-the-board success can be debated; Mameli’s somewhat dispassionate death growl lacks definition at times, and some of the between-track interludes are a bit heavy-handed. In less capable hands, Testimony of the Ancients could have been a laughable failure, but Mameli’s calculated, intellectual approach makes the record a minor triumph to be placed next to progressive death metal classics Human by Death, Unquestionable Presence by Atheist, and Not to be Undimensional Conscious by Disharmonic Orchestra.