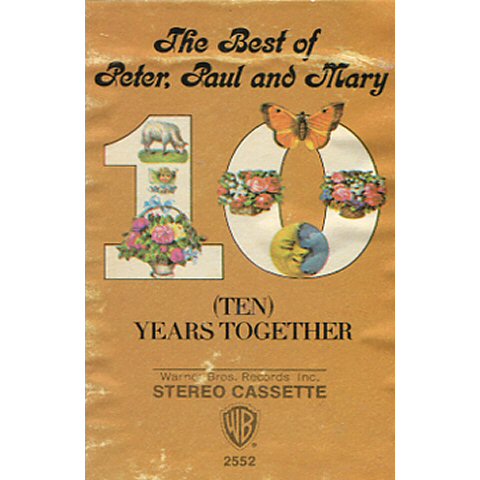 Peter Paul And Mary ‎–Ten Years Together The Best Of MC

Reduced price due to storage wear on cover

For many years, this 13-song collection was the best introduction to Peter, Paul and Mary that one could find. Not only did it contain all of the trio’s hits, but it was also, until 2005’s Warner/Rhino compilation The Very Best of Peter, Paul & Mary, the closest thing to a cross-section of the group’s sound that existed. From the acoustic folk sound of “Blowin’ in the Wind” to the electric guitar and drum driven folk-rock of “Too Much of Nothing,” the evolution of their sound is handily summarized, albeit not in chronological order, with a few surprises in store for the neophyte fan. In particular, those who think that the trio was relentlessly earnest and issue-driven likely will be delighted by the satirical “I Dig Rock and Roll Music,” a Top Ten hit in 1967 that managed to poke good-natured fun at several musical icons of the period. Bob Dylan is, of course, well represented among the composers, but so is Gordon Lightfoot, and with Pete Seeger and Lee Hayes, John Denver, and Hedy West also present (along with Stookey, Yarrow, and Travers) as songwriters, there’s no lack of variety to the material, subject matter, and sounds on this album