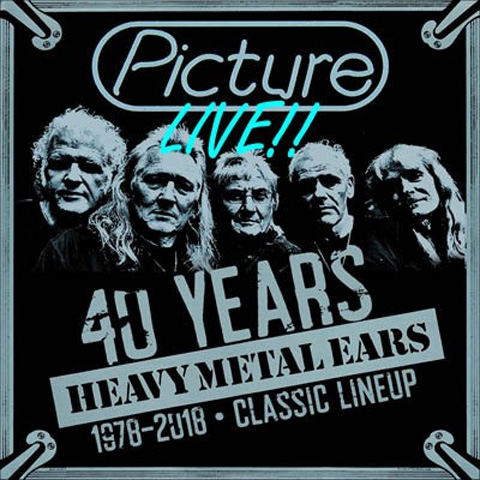 The Dutch metal act Picture have gone through many incarnations, from the original line-up of Ronald van Prooijen, Jan Bechtum, Rinus Vreugdenhil, and Laurens “Bakkie” Bakker, to the Shmoulik Avigal years to Pete Lovell and various guitarists and even a drummer or two along the way. The solid, consistent force was always Rien. Even in the glam AOR years of Every Picture Tells A Story, Traitor and Marathon, he soldiered on. The band went quiet for a while and came back off and on through various incarnations, all of which I followed and liked. I couldn’t have been more excited when word came down that the original line-up got back together. Sure, they’d done some rehearsals and maybe a one-off gig here and there in the long gap since the second album, but 2017 was the first time the originals actually sealed the deal and went for broke. With the addition of one Appie de Gelder, guitarist extraordinaire, to enhance their live sound, they came back with a big bang. What really amazes me, well to tell the truth, it really doesn’t, is how great they sound. It’s as if the Ronald has never left the stage. In a way, he hasn’t, given the side gigs from his day job with the band Roslynn, from where he brought Appie. Of course, Rien and Bakkie were keeping the flame going with Picture in various incarnations and Jan was quite busy himself, participating in a few variations of the band, plus working on his own stuff on the side. When they came together, playing this live gig, recorded at Ridderkerk in the Netherlands in 2017, the results were phenomenal. It was as if the original band never left the stage 30 some years ago, when Ronald first left. They just added a bunch of new songs along the way. Pretty much all the classic songs from the Picture catalog are here, culled from their best albums. It sounds like they were really enjoying themselves up on that stage. I couldn’t hear the audience in the mix very well, but it sounded like they were as well. This is a live recording and there’s no mistaking it. This is not a recording full of studio trickery and years of polished slickness from a band that’s never taken a break. It is raw and full of energy and it’s exactly what one would expect from seeing a real band live. It’s great rock and roll the way it was meant to be heard. With a little bit of smoke, sweat, and ambient noise, I could close my eyes and feel like I was there in the audience. If you want a real, honest and exciting live album from the classic, first and best heavy metal band from The Netherlands, you can’t go wrong with Picture. They knew how to do it right way back when, and still do. They not only still rock, but know how to turn it up to 11. Highly recommended!