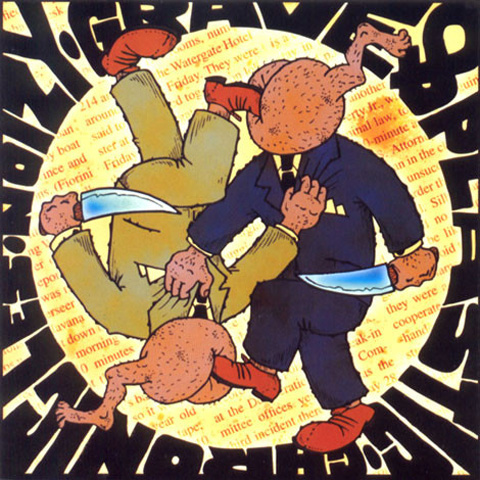 Czech grind act Plastic Grave features members of Ingrowing, Mac of Mad and Bizarre Embalming. Plastic Grave makes furious grind songs that break into pop-punk passages, yammering and high-pitched vocals often make an appearance. Noizy Graves And Plastic Chronicles includes what I believe is the band’s entire discography on a single disc, which comes to 75 minutes of Czech grind, an amount that many can get a problem with. Plastic Grave is a bit interesting in that they’re definitely one of the crustier bands I’ve heard in this scene. Just about every Czech grind band has a greater or lesser amount of crust punk to them, but Plastic Grave make it obvious and omnipresent, shuttering out a lot of the other typical influences in this style in favour of a more decisive punk attack. A certain level of influence from bands like Cripple Bastards is clear- while Plastic Grave’s songs tend to be more involved and complex, owing to their death metal influence, punk is the overriding mode that the band works in throughout their discography. In fact, a great deal of the time, you’d think you’re just listening to a straight-up European death/grind/crust record. The music is crusty, but heavily influenced by death and thrash metal alongside it. Most of the songs are structured like Nasum tracks: a couple main riffs, drums that alternate between blast and thrash beat, and a high/low vocal performance that recalls Carcass. If you’re a fanatic for the Czech style of grind, try it out