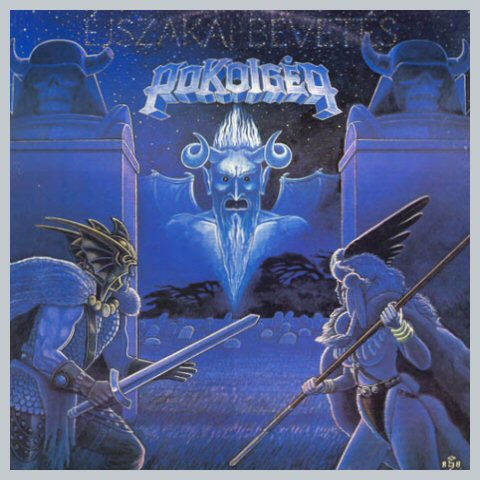 Hungarian act Pokolgep are one of the most important heavy metal acts from Eastern Europe, and their four early albums – Totalis Metal (1986), Pokoli Színjatek (1987), Ejszakai Bevetes (1989) and Metal Az Esz (1990), are the ultimate classics of the genre. Their third album Ejszakai Bevetes (Night Raid) showed a band with a bit of a broader vision. The album featured a bigger variation of songs where the band shows that they were not all about speed. The album opens with Gep-Indulo (Ignition), which is a speed metal anthem for the masses. The lyrics are total Judas Priest worship, with the chorus ending “there will always be rockers”. Out next is A Lazado (The Rebel), the first slower song coming out sounding like Accept, not bad at all. On the third track, A Pokol Angyalai (Hells Angels), we find Laszlo Nagyfi on vocals. This is a faster track again but this time with Nagyfi’s voice whish is more growling compared to Kalapacs. The highlight on this disc must be A Haboru Gyermeke (Child Of War). It’s a power/speed metal track, something between Walls of Jericho and Keeper of the Seven Keys. Really nicely done melodies, and a great solo. Up their with the best tracks the band ever did. Tepett Madar, Itt Es Most are slower songs, Most Mar Elek a decent heavy metal track, Kar Minden Szo another good track bordering on speed metal while the last track is pretty much just a the band sounding drunk and banging on tables. So overall the highlights of the album compare well with other Pokolgep classics and should be in your collection as well