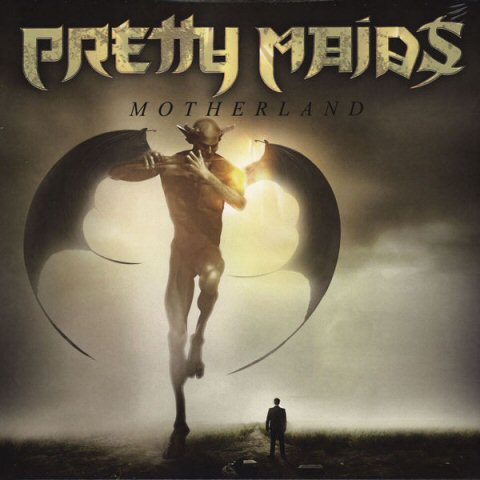 Motherland is the highly anticipated follow-up to 2010’s critically and commercially successful comeback album Pandemonium. Pandemonium was a great record…but I don’t consider it the unabashed classic that some do. True, it was the freshest and most vital the band had sounded since the early 90s but it also had its share of filler as well. Beautiful Madness and Breathless always struck me as leftovers…possibly from the previous release Wake Up To The Real World. Also, I felt the inclusion of a remixed version of It Comes At Night was unnecessary and damaged the flow of the album. It’s always difficult to follow a successful record. I remember reading interviews with the band where this was addressed over the last couple years. Well, they don’t need to worry. Motherland surpasses Pandemonium easily. The production is absolutely stellar. It stomps all over Pandemonium from a height of 10 miles. It makes Wake Up To The Real World sound like a collection of demos. I’m not exaggerating. Go listen to that album and then chase it with Motherland. They sound 20 years apart. Jacob Hansen (Volbeat) has given the band a sound that not only reinvigorates them but also incorporates the soundscapes of the past. This is Pretty Maids circa 1987, shoved into a time machine, and dropped off in 2013. It is modern and classic at the same time. Jacob Hansen might be the Maids very own Mutt Lange. Another huge part of this new sound is Morten Sandager (ex-Mercenary) whose keyboard work is epic and moving but non-intrusive. His work here is ambient and chilling in places and warm and connecting in others. Above all, it is modern and gives all these songs an heir of respectability and power. It’s been a while since the Maids had an official keyboard player in the band…Morten was a fabulous choice. What can be said about Ronnie Atkins and Ken Hammer? One of the best writing teams in the genre. Atkins’ voice just gets better as the years go by. Menacing and vicious one minute, melodic and soothing the next…he’s truly a marvel and I suspect an inspiration to many melodic death vocalists today. Motherland is his shining moment. I really can’t say he’s sung better on any other album. He’s always sounded awesome…but this is another level entirely. Likewise, Hammer is on fire here and lays down some of his heaviest riffs in recent memory. The definition of underrated. Every track on this thing is worthy of attention whether its the dark, mid-tempo crush of Mother Of All Lies and To Fool A Nation, the face melting stormers The Iceman and Hooligan, the ultra groove monsters Motherland and Who What Why Where When, the top-flight melodic metal of Why So Serious and I See Ghosts (this one is going to be an absolute corker live), or the lush, commercial stadium anthems Sad To See You Suffer, Infinity, Bullet For You, and Wasted. Wasted, in particular, is one of the greatest heavy ballads the band has ever produced. This is a true modern lighters in the air power ballad. Massive vocals on the hook, that haunting keyboard riff…they really nailed this one. Just brilliant. Motherland marks a new sound. A new focus. A new beginning. If you’ve never heard Pretty Maids, this is a perfect place to start. Don’t be late to the party.