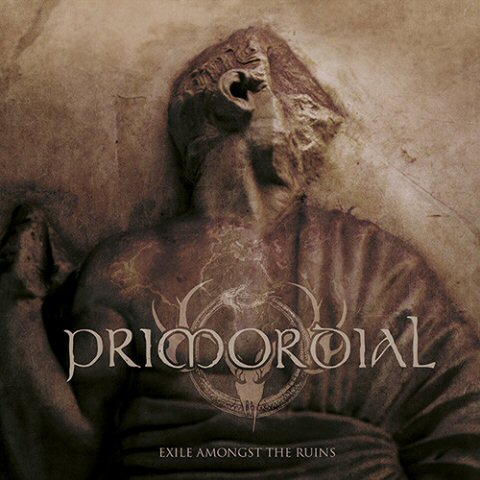 Primordial -Exile Amongst The Ruins dlp

There are few bands that are nearly universally known to produce consistent, passionate, and sincere albums. Dublin’s Primordial is most certainly one of those bands. After 27 years of existence, they released their ninth full length album, ‘Exile Amongst The Ruins,’ and it is one of the strongest albums of their career. This album more than lived up to the expectations set with the 2014 album ‘Where Greater Men Have Fallen’. With a consistent line-up for their entire career, it is no surprise that Primordial have crafted a unique and signature sound all their own, a mixture of Celtic, black, and pagan metal that is held together by the impassioned vocals of A.A. Nemtheanga. It is also not a surprise that men so dedicated to their craft have continued to evolve and grow over the decades. While going back to a more raw and aggressive energy similar to their early output, they also include several songs that are unlike any others in their long career. Having fallen in love with their music since the first time I heard ‘To The Nameless Dead,’ hearing this album and its progression was pure joy. Thematically, while not having a concept, there is a thread that runs through several of the songs (as well as the album title). Nemtheanga explains: ‘I’ve thought a lot about the loss of our ancient European magical systems, our spirituality and our suicidal headlong journey into amoralism and decadence, which is where the title comes from. I’ve placed these against the values of the Enlightenment and classical civilization, and the people who want all countries under the yoke of an unelected federalist fiscal, political and cultural hegemony.’ Unlike many other artists who use their position to preach to the masses, Nemtheanga is content to do as he has often done and make observations, metaphors, and parallels with the past. The interpretation is left to the listener. ‘Exile Amongst The Ruins’ is a masterful statement, and while not quite the masterpieces that ‘Where Greater Men Have Fallen’ or ‘To The Nameless Dead’ are it is very, very close to those two works. It speaks to the heart and the head, and has the ability to make one rage or to weep. These sons of Ireland have no peer in their genre, and this album makes it very clear why.

Track list:
1. Nail Their Tongues
2. To Hell Or The Hangman
3. Where Lie The Gods
4. Exile Amongst The Ruins
5. Upon Our Spiritual Deathbed
6. Stolen Years
7. Sunken Lungs
8. Last Call