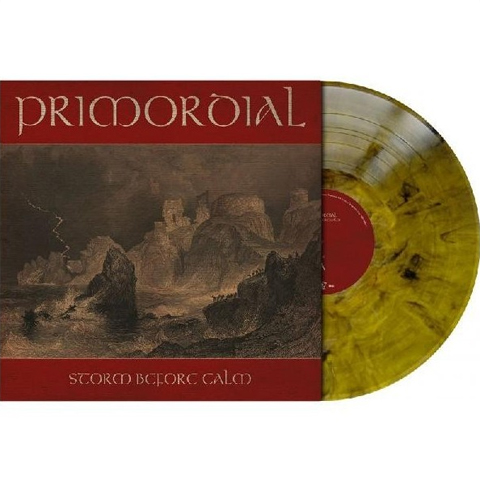 Storm Before Calm is an astounding release that emits an almost blinding aura of quality. The music of Primordial is frighteningly powerful, grandiose, and utterly transcendent. Hailing from Ireland, their lyrics and conceptual imagery is rich with Celtic mythology, enthralling mysticism, and convincing references to the noble codes of the mediaeval warrior. Their music can charge along to invoke a storm of breathtaking assault but also calms to present deeply affecting, pensive passages that highlight the fear and despair that encompasses the moments before and after battle. Primordial’s contribution to the world of melodic Black Metal is one that I stress should not be overlooked. They make it all seem exciting and novel again. Their approach is mature, progressive, enthusiastic, and intensely emotional. Even the fastest and most aggressive parts are infused with a hypnotic beauty that not only tugs at the strings of the heart but also quickens the pulse into throbbing, euphoric overdrive. The listener is hard pressed to resist the band’s majesty and not be carried along into their misty gray world. Nemtheanga’s voice provides the final pinch of pain and suffering to the near overwhelming grandeur of the driving anthematic music. From a soaring venomous rasp to his frequently employed near guttural groans make for an honest, genuine expression of primal passion. Some vocal purists might wince at Nemtheanga’s regular tendency to slip out of key, but for whatever reason, it works and has the same profoundly distressed effect that worked so well for the early Anathema releases (both the Darren White period and when Vince Cavanagh first approached the mic on “The Silent Enigma”) The emotion is raw and riddled with a convincing anguish, rather than the blind manufactured rage that seems to fuel most aggressive metal vocalists. There is vulnerability here, as opposed to inflated machismo. Though Primordial is by no means a simple band, they do not bother with virtuosity for virtuosity’s sake. Their music is genuine, precise, progressive, and terrifying in its grandeur. It is the importance and coherence of atmosphere that shapes how the music is structured and what is necessary to make the songs strong and memorable, and what brings them to life. The Black Metal aspects come straight from the early old school days of the genre’s infancy, but are filtered and cleaned up to present a crisp, clear production (I might suggest a comparison to the guitar stylings Opeth and Katatonia in a frenzied, manic state or perhaps Burzum with melody). Basically, they make Black Metal listenable, while remaining faithful to the necessary aggression and confrontational elements that are part and parcel to the purest examples of the genre. I cannot say enough good things about this release. I decided to avoid highlighting the strengths of individual tracks, simply because “Storm Before Calm” is comprised of seven tightly structured songs that work in unison to present a complete continuous work. It is best to be absorbed as a whole and I hope that fans of elite, high quality dark metal music of all kinds do not wait as long as I did to begin a relationship with this indisputably talented band. Metal fans would be wise to purchase this release immediately!

Track list:
1. The Heretics Age
2. Fallen To Ruin
3. Cast To The Pyre
4. Suns First Rays
5. What Sleeps Within
6. Sons Of The Morrigan
7. Hosting Of The Sidhe