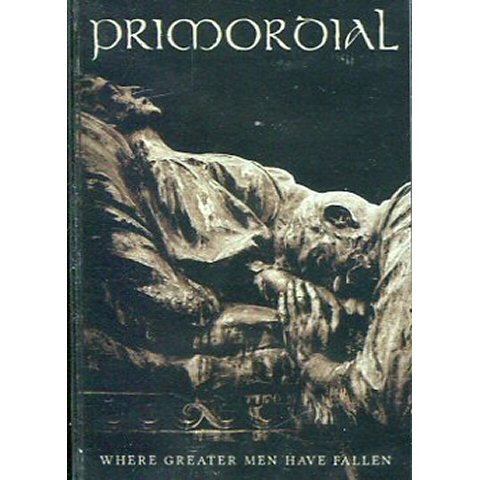 It took them three years, that is literally over one thousand days and we are many that have waiting to hear just something about new material. Now the Irish pagan metal masters Primordial has released the Where Greater Man Have Fallen and just like the remedy to not enough cowbell is more cowbell, the remedy to no new Primordial is new Primordial. True to form of their past efforts, Where Greater Men Have Fallen encompasses swelling melodies, epic soundscapes, and the darkly poetic bellows and croons of Nemtheanga. Singer A.A. Nemtheanga elaborates: Some time at the end of 2013 we sat and began to plot a course for album number eight. We moved camp to a new rehearsal room and the ideas began to take shape. We felt it was time to try a new studio and engineer so we went to Grouse Lodge deep in the middle of Ireland and employed Gomez to come over and work on the new album. The bands idea was, of course, to keep the Primordial trademarks intact while incorporating a broader, heavier more organic sound. We feel revitalized, the hunger never left and we are ready for another chapter to be written in our history. The world has been graced so its time to buy and get low and slow

Track listing:
1. Where Greater Men Have Fallen
2. Babels Tower
3. Come The Flood
4. The Seed Of Tyrants
5. Ghosts Of The Charnel House
6. The Alchemists Head
7. Born To Night
8. Wield Lightning To Split The Sun