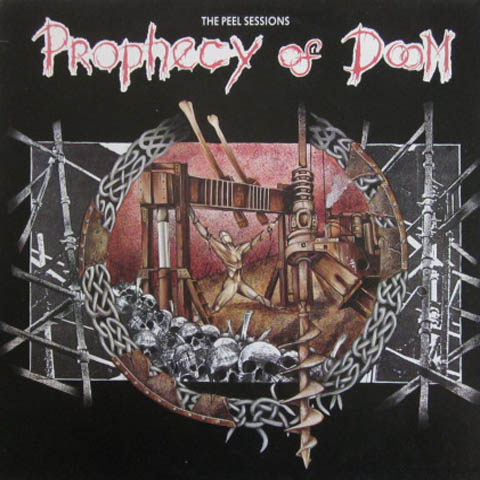 Some of the best materials from acts such as Extreme Noise Terror, Doom or Napalm Death were recorded during their visits to the BBC studios for the Peel Sessions recordings. John Peel was a major important person when it came to the new UK hardcore scene and sound. To be offered a Peel Session was a big deal for punk bands at the time. Pretty much every punk kid was a fan of the man’s open-mindedness and enthusiasm and got to discover top bands through his show so it was felt as a major achievement to be invited to be a part of it, without mentioning that your band was going to be broadcast nationally on the BBC with all the exposure that ensued. I suppose one of the main reasons – if not the main reason – why punk Peel Sessions always sounded ace was that, for many bands, it would be the only opportunity to play on state-of-the-art equipment, as opposed to the usually shitty amps of their practice spaces, which accounted for the fantastic sound production they were treated with. Besides, the very idea of playing the noisiest, filthiest grinding hardcore on such expensive appliances, live on the BBC radio must have felt quite exhilarating and an antithesis in action. Punk, innit? When it comes to Prophecy Of Doom, from Tewkesbury, you can confidently assert that their two Peel Sessions deserved to be regarded as the best material they ever recorded. PoD were certainly one of the most unique and convincing bands pertaining to the original UK crust wave and, at their peak, their brand of intelligent, oppressive grinding stenchcore certainly amounted to the best of what crust had to offer. The Peel Sessions Ep was recorded on January, 28th and broadcast on February, 14th, 1990. It includes four songs that was recorded with the same line-up of Shrew, Shrub, Tommy, Dean and Martin. I suppose that if you played PoD for the first time to an innocent punky bystander, a common first reaction would be one of genuine wonder at Shrew’s very peculiar vocals since he used a guitar effect pedal (some sort of delay) making him sound like the rotting corpse of some unidentified but undoubtedly monstrous and barbaric creature growling at your guilty conscience from beyond the grave. It is just a lovely feeling. While I am generally not a massive believer in using too much effect on your vocals, the combination of the delay with the threateningly gruff, insane-sounding vocal style works ideally with PoD and it has to be said that it was a daring move for the time. Prophecy Of Doom could be defined as an oppressively groovy grinding crust band with a leaning towards early death metal or as an epic pub brawl between early Carcass and Mindrot, ’89 Deviated Instinct and ’88 Hellbastard but I feel that such comparisons cannot render the suffocating atmosphere of madness permeating PoD’s sound and their original take on the genre, be it in terms of song structures, writing or sonic textures. You will find many different paces in these four songs, from fast-paced cavemen crust to mid-tempo mean pummeling stenchcore, blasting grinding death metal or painful and dark sludgy moment, all shades of crust punishment answer the call. As you can expect, the production is absolutely perfect and the bass sound is to die for. The lyrics were another strong point of the band with rather thought-provoking words about our pervasive egotism, the subconscious thought processes, the lies and conceit we create to keep going and the ensuing personal and social insanity. PoD’s lyrics were like their music: quite unique and smart.