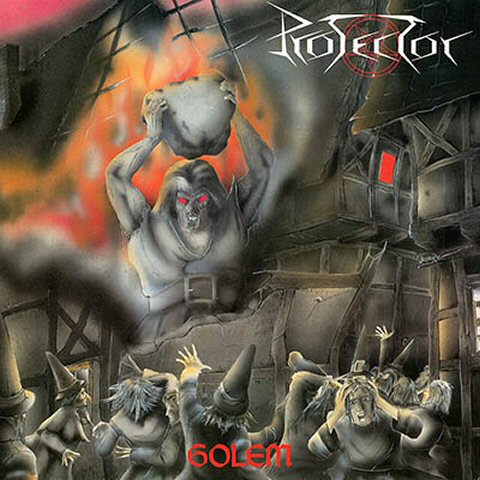 It’s a damn shame that Protector isn’t as well-known as their fellow countrymen in Kreator and Sodom, but history has proven that being well-known doesn’t make your music better, because I would take Golem over albums like Extreme Aggression, Tapping the Vein and Release From Agony 10 times out of 10. There’s a reason why Protector is adored by many in the metal underground (especially in thrash circles) and that’s because their brand of thrash was different from the bestial sounds of their Germanic comrades. This music is deadly, precise and absolutely violent, much more so than the Bay Area bands of the ’80s and plenty of other thrash bands that popped up. One thing that becomes immediately apparent with Protector and their music are the riffs. Instead of opting for the rape of the E-string and the insertion of some powerchords, a lot of the riffs are ridiculously fast and feature a vast amount of shifting hammer-ons and single notes that make for a lot of headbanging, but also a lot of memorable moments. The riffs on Delirium Tremens and Protector of Death are fucking maniacal and Hasse’s intense drumming only adds to the blistering fury. And proving that they weren’t just speed freaks, Protector did a brilliant job of structuring their music and showed some stellar songwriting skills with tracks like Apocalyptic Revelations and Only the Strong Survive, as both start with some pretty epic buildups that eventually morph into an insane assault that have fallen upon many a metalhead’s ears. Everything else on Golem is top-notch as well. The aforementioned drumming adds a lot of heft to the music, as well as even more speed. Belichmeier’s bass performance is another highlight on this album, as it’s always audible and almost seems like another instrument entirely, rather than simply following the guitar patterns. Germanophobe is probably the best example of the excellence of the bass on this record and is a prominent reason why it’s also my favorite track. Missy’s vocals are disgustingly beautiful as well. They’re lower in tone than Mille Petrozza’s, but not as guttural, yet they’re just as diabolical and suit the music perfectly. There’s really not much more to say about Golem and Protector. This is just a band that makes violent and masterful music that should be fellated by every metalhead.