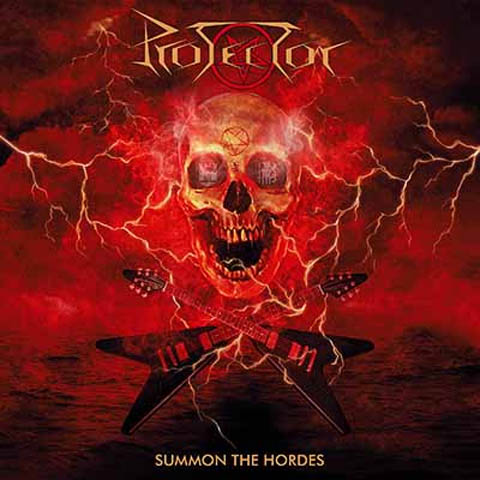 Teutonic thrash veterans Protector’s 2019 album completes what one can only describe as a classical hat-trick. After a glorious return to original form on Reanimated Homunculus with a wholly new line-up and its successor Cursed And Coronated, Martin Missy and company again hit the proverbial bull’s eye with Summon The Hordes, an epitome of consolidation and rejuvenation at once. The songwriting process changed a bit when it came to work on another record, says the frontman. As opposed to composing only one track like on our previous efforts since the reunion, this time around, I contributed three tracks, whereas our bass player handed in two lyrics; this is new, for in the past, the singer alone was responsible in this regard. Involving his younger fellow-musicians even more than as of late makes perfect sense, because they have become an integral part of Protector since 2011 and understand very well what a good thrash song in the 80s vein needs. There he said it, yet while Summon The Hordes harks back to that groundbreaking decade as one could have expected, Protector would not be themselves if they had not build in certain twists and updated their working procedures. Most prominently, as opposed to its predecessors with their Swedeath-infused ambience courtesy of Tomas Skogsberg and legendary Sunlight Studios, the new material boasts the production values of no other than the iconic Harris Johns, who has long since gone into the annals of metal for shaping not just the German scene’s sound aesthetic, as shown on a whole host of seminal genre releases.