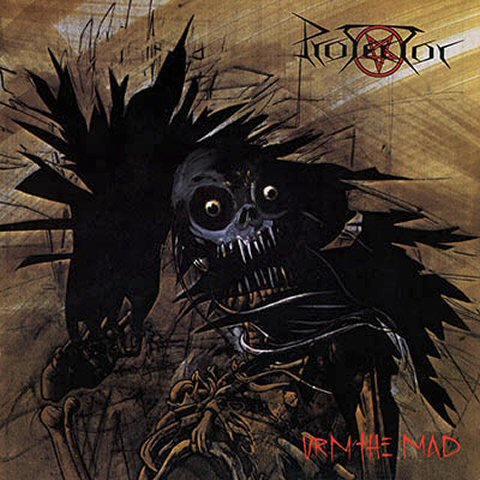 Black vinyl with 2 inserts, poster and a promo photo

Urm The Mad was released in August of 1989 and it proved that Protector was a band that kept their original sound and the total merciless death/thrash concept while others began to become inoffensive and predictable. Quasimodo or Decadence, which are the most inspired solid songs of the pack, made clear Protector didn’t want to change their old ways. It’s true that the sound of the band hasn’t really evolved or developed by the late 80s, but that doesn’t mean they couldn’t offer relentless thrash with death elements like on previous brilliant releases. The riffs and hooks that take control on these violent compositions are straight, harsh and remarkably heavy. Not that dynamic or loose as before, you can notice the group focus on the intensity and weight of them, slowing down the tempo in tunes like Nothing Has Changed and The Most Repugnant Antagonist Of Life (I love that title) to reach a sinister cathartic climax. The result is decent, not as memorable as on the fastest moments of the long-play, though. The elements of death metal are becoming more notable this time, they forget about velocity to execute mid-paced stuff and give attention to the rough grotesque vocals. There’s not so much blast beats, but in other numbers like Sliced, Hacked And Grinded, Atrocities or the title-track, Protector alternate fierce double bass-drum beatings and rampant rhythms with quieter lengthy breaks. The bridges are skilled and necessarily numerous, so there’s no weakness on the song-structures, which are slightly complex. The unpredictable tempo changes are admirable and elaborated; technique is immaculate and performed rightly. These tracks are musically strength and competent enough to reach a very high level of musicianship and creativity, even if they don’t offer nothing significantly new that we didn’t hear before from them. It’s not a perfect long-play, but those handicaps make it honest, raw and heavy. Another great splendid release that made clear where the most brutal metal was done. No melody, no extremely technical progression, no mercy. Their stunning death/thrash combination makes sense and works fine without exception, so fans of both subgenres will love this wicked material. I always wondered why these guys never reached the recognition and popularity or some of their country mates and still keep terribly underrated and forgotten. The discreet appreciation from most of thrash and death fans of this group is unfair to the extreme, so sad because these compositions can perfectly compete with anything the big famous death and thrash heroes made.