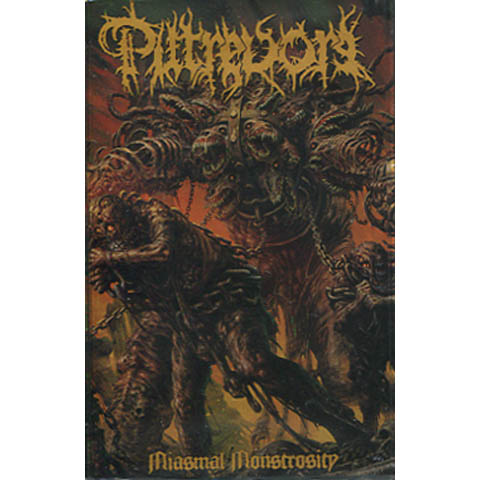 Miasmal Monstrosity is the fourth album by the Swedish-Spanish band Putrevore. Formed in 2004 by Dave Rotten (Avulsed, Holycide) and Rogga Johansson (Paganizer, Ribspreader), Putrevore has been forging its heavy, dense and brutal sound through three albums and two split EP’s. In Miasmal Monstrosity, the band has perfected their sound, and while the current fashion, when it comes to dark and heavy death metal, is based on imitating Incantation, Putrevore continues its own vision creating a perfect album where both the own band’s name and the album title, perfectly define what the nine songs included here sound like; A sound that’s incredibly brutal, heavy, dense, crushing, intense, dark, putrid… Rogga’s vicious and morbid riffs, along with Dave Rotten’s monstrously decomposed and inhuman voice and Brynjar’s intense and crushing drumming, make Miasmal Monstrosity possibly the most overwhelming death metal album of the year.

Track list:
1. Those Who Dwell Beyond
2. Vortex Devourer
3. Terrible End Of The Conjurer
4. Clad In Skind And Rot
5. Bloodlust Of The Sleepers
6. Miasmal Monstrosity
7. The Fleshmen Awaits
8. With Tentacles Adorned
9. Consume All Flesh