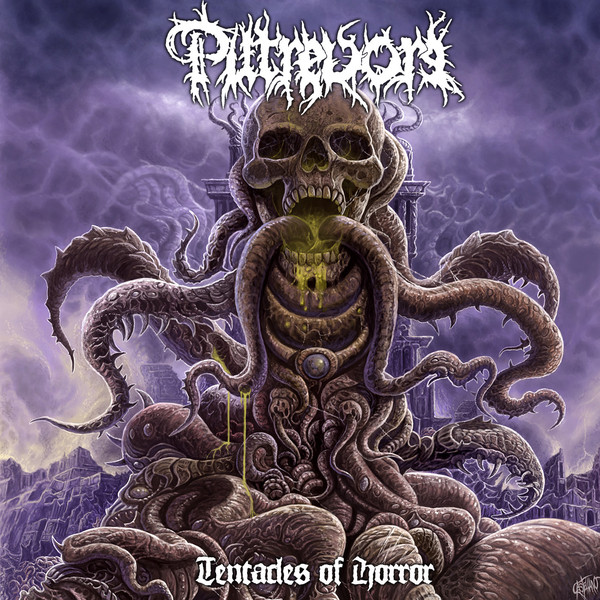 The roiling, ominous, Putrevore has been my favourite of the many Rogga Johansson collaborations since its inception, but as with the rest, there has always been the risk of retreading the same ground too damn often, a criticism I’ve often seen levelled at his more long enduring bands like Paganizer or Ribspreader. With Tentacles Of Horror, the duo of Rogga and guttural guru Dave Rotten (from Avulsed) attempt to channel the nihilistic punishment of Morphed From Deadbreath and the amazing Macabre Kingdom into a more varied, dynamic and I daresay ‘accessible’ direction with largely successful results, though I came away from it with some degree of disappointment since it lacked the suffocating and crushing capacity of its forebears. This is largely the same neo-Incantation style, with the grungy rhythm guitars and pure wall of growl that the prior albums mastered, only a lot of the riffing structures and drums are focused more around a basic groove that occasionally treads into blasting territory. The bass has a nice distorted tone to it which sounds cool where it appears on its own, but also adds some reinforcement to the tremolo picked patterns, some of which retain that morbid appeal of predecessors. Once this album lays it all out with hammering drum tracks and Rotten’s murky ravings moving simultaneously with a pure 1990-93 guitar progression, it definitely reiterates the character of Macabre Kingdom, but where that record just felt so over the top and hostile and cataclysmic, this one just seems more of a laid back affair. Some tunes like “Through the Vortex to Aeons Past” and their ilk have a slightly more overt nod to the Swedish aesthetics of bands like Dismember and Entombed, which Rogga has already beaten to death in other projects, but the majority of the material hearkens back to the first few Incantation discs, maybe some Rottrevore, or Finns like Purtenance in their earlier years. The Juanjo Castellano cover art is great, and the lyrics are on par with the first two records, glimpses at vistas of Cyclopean horror. I think listeners will find the production to this most approachable; the second album was quite caustic, especially with the mix of the beats, and yet that ended up lending it an otherworldly character strangely suited to the archaic fictional beings it summoned. Here you’ve got a cleaner effort which thankfully doesn’t dispense that great guitar tone or Rotten’s subterranean vocal effects.