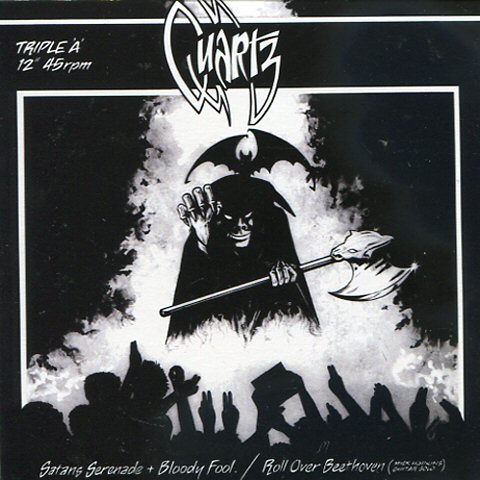 Mini cd replica of the legendary NWoBHM EP from Quartz. It features the same tracks like on the original single. Official reissue authorized by the band in a limited run of 500 copies only.

Quartz came out of the British hard rock hotbed of Birmingham to join the New Wave of British Heavy Metal movement in the late ’70s. They signed a contract with JET records and toured with both AC/DC and Black Sabbath before beginning work on their first album. The tour with Black Sabbath turned out to be quite fruitful, as they gained a tour manager (Albert Chapman) and a big fan in Sabbath guitarist Tony Iommi. Iommi took over the production duties on their eponymous debut, drafting Queen’s Brian May into the sessions to play some guitar. The album was important to the emerging scene, and they joined Diamond head and Def Leppard in being one of the first bands to make heavy metal faster and less plodding. Quartz stayed relevant to the genre for their short time together, but by 1983 their irreconcilable differences split the band apart. Time has eroded how important the band was to the genre at the time, but fans of that period in heavy metal history know Quartz’s place in the scheme of things. The title cut on their 1980 Ep Satans Serenade is nothing but a stellar classic.