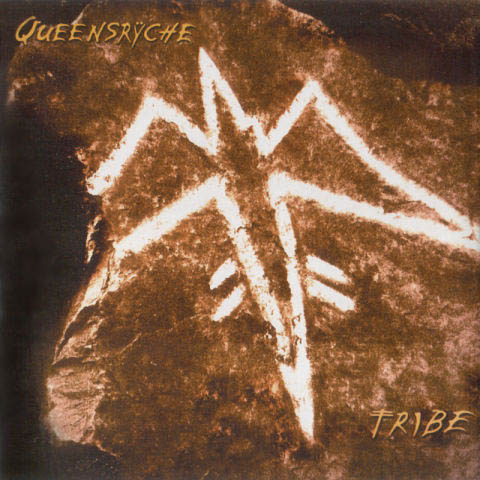 Tribe is, in so many ways, a make or break album for Queensrÿche. While the Live Evolution set brought home 30 tracks of the Rÿche’s concert material — with or without founding guitarist Chris DeGarmo — the band’s studio output since Promised Land (and some would debate the validity of that album) has been inconsistent. For starters, there was the departure of DeGarmo after the disappointing Hear in the Now Frontier, and then the loss of another guitarist after the lackluster Q2k. Certainly there were moments of brilliance on both recordings, but the inspiration and fire that fueled earlier efforts were lurking behind the scenes somewhere. On Tribe, the band reunites with DeGarmo. The original lineup wrote and produced Tribe. Whether or not DeGarmo is returning to the band as a full-on member is not clear as of this writing. Tribe reflects a renewed vigor and vision in the Queensrÿche sound. This is prog metal at its best: knotty song structures, complex melodies, bruising guitars, and Geoff Tate’s voice and lyrics asking all the tough questions. While this is not a concept album, the themes of tolerance, compassion, the environment, the simulacra at the heart of American society in particular and globalization in general, and the prospect of oblivion haunt this recording. There is a humanist-centered spirituality at the heart of these songs that already sets it apart from any metal record on the market. But this is no new age recording. Spiraling riffs and choruses are woven tightly in “Blood,” while “Rhythm of Hope,” with its gorgeous keyboard layers against DeGarmo’s guitars, brings the trademark Queensrÿche atmospherics toward a new wall of noise edge. The riffing and vocal harmonies on “The Art of Life” are incendiary; this may be one of the finest tracks the band has ever recorded. Ultimately, the members of Queensrÿche prove they’ve been hearing the sounds of today’s progressive metal à la Agalloch, Green Carnation, Anathema, Katatonia, and even Opeth, while remaining true to their own writing vision — hooks, sprawling melodic architecture, and unflinchingly honest and even scathing lyrics rooted in an inclusive vision of empathy and compassion that would be unthinkable for any other band. Tribe is the sound of a band revitalized, growing with its fans and looking for new ones while remaining true to what made it so special in the first place. Tribe is Queensrÿche’s finest recorded work since Empire, period.