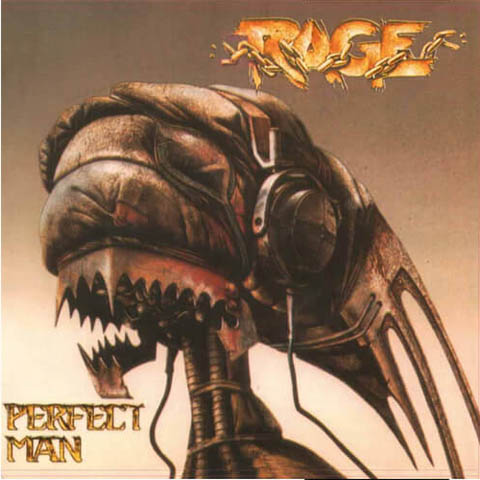 Rage’s second offering, Execution Guaranteed, was a letdown. But Peter Wagner, founder of the band, decided to take another attempt at hitting big. With all the band members fired, he brought in some fresh blood in guitarist Manni Schmidt and drummer Chris Efthimiades. The resulting album Perfect Man was the band’s first major success, and remained their best album for quite some time. The speed and energy of their music is even more impressive if you think that there are only 3 people playing. Being a trio, Rage’s ferocious hyperspeed melodic metal is superior to what many bigger bands ever put out. Rage’s version of speed-metal bears a notieable Accept and Running Wild influence, but here the band displays itself as a creative force, not just one of Accept-wannabes. Here Rage did what they did best, played metal at some unbelievable speeds. However, they never played fast just for the sake of it, and managed to keep a nice melody and display some good handling of their instruments. The songwriting is consistently strong, and there are only 2 or 3 sub-par songs among the 14 pieces on the original album. Classics like ‘Wasteland’, ‘Perfect Man’, ‘Don’t Fear The Winter’, ‘Supersonic Hydromatic’, or ‘Time And Place’ show what’s so good about Rage.