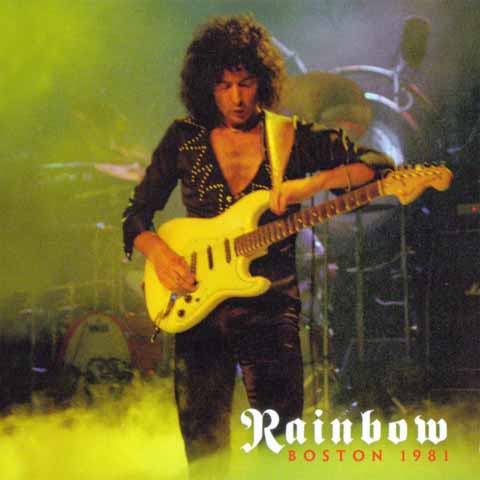 Ritchie Blackmore’s post-Deep Purple project, Rainbow, never really broke through to the mainstream in the United States and never remotely approached the commercially successful level of Deep Purple anywhere in the world. Part of the reason was timing. The initial line-up fronted by future metal legend Ronnie James Dio was simply a band before its time. Though it sowed the seeds for what would become Power Metal a decade on, it never quite caught on with the public in its day. Dio’s replacement in the band was Graham Bonnet, a powerhouse vocalist in his own right. However, Bonnet’s insistence on looking like James Dean frustrated Blackmore to no end and confused fans. When Bonnet quit the band, Blackmore decided to take his time and find a vocalist that had a great voice, but also looked the part. He was initially pleased with finding Joe Lynn Turner and thought he fit the bill. He sang great in the studio and at rehearsals, and was a good looking frontman. After recording the Difficult To Cure album and rehearsing for a few weeks, the band hit the road. It was in this initial time-frame that Boston 1981 was recorded (taped at The Orpheum Theatre on the 7th of May 1981). Much to Blackmore’s dismay, while Turner could certainly sing well and appealed to female fans, he didn’t front the band like Blackmore expected or wanted. Blackmore felt that Turner was too effeminate and light-weight on stage. Video of the Turner-era Rainbow bears this out. This could be because in Turner’s previous band, Fandango, he’d played rhythm guitar besides singing lead vocals and didn’t know how to front a band empty handed? Whatever the reason, Turner struggled with the job. In interviews in the years since then, Blackmore has revealed that he and the band nicknamed Turner, Judy as in Judy Garland and considered Turner more Liberace than rock and roll. Even a cursory listen to Boston 1981 shows all of Blackmore’s criticisms and concerns were valid. The show opens with Spotlight Kid, from the new Difficult To Cure album. Turner actually shines here and his voice works in all the right ways. Musically the band is firing on all cylinders and the end result is a smashing success. However, the next song goes off the rails. Love’s No Friend was originally done when Graham Bonnet was in the band and his vocals are sorely missed here. Turner just doesn’t have the power or grit of Bonnet and his lightweight approach doesn’t work here. I’ve met countless fans over the years who nicknamed Turner as Squealy and the origins of that nickname are right here. He struggles throughout the song and his voice just isn’t suited for the Bonnet material. Another song from the Difficult To Cure album is up next (I Surrender) and as expected, Turner shines. The next song, Man On The Silver Mountain, once again demonstrates that Turner just can’t handle the gritty, ballsy, heavy rock songs that were originally sung by Dio and Bonnet. His lightweight approach completely neuters the song and his tampering with the original melody completes the castration. He sings it like a cabaret singer might and it ultimately comes off like a Vegas show tune. Catch The Rainbow follows and while the band is on target, Turner displays two distinct personas here. One is the decent rock singer, who can sing with clarity and finesse. The other is the sleazy lounge singer, who over emotes and oozes 100% cheese with his approach. Surprisingly, even though the next song is from Difficult To Cure, Turner manages to miss the mark here. He simply loses the plot on Can’t Happen Here, delivering a lounge singer vocal to a hard rock song. The band delivers fire and Turner counters with schmaltz. This sadly turns out to be the case with the rest of the show. Hard rock music, delivered by an ace group of musicians and sung by a second-rate Michael Bolton. Lost In Hollywood is another Bonnet-era song and Turner just can’t handle it. A long instrumental medley ensues and eventually launches into Long Live Rock N Roll. Again, Turner is simply unable to do Dio-era Rainbow any justice. The set ends with a perfunctory version of Smoke On The Water and the half-assed instrumentals are only topped by the lounge act vocals of Turner, proving that his inability to sing Gillan songs pre-dated the 1990 Deep Purple disaster of Slaves And Masters. Overall, Boston 1981 is for completists only. For better examples of Turner fronted Rainbow, try San Antonio 1982, Cardiff 1983 or Tokyo 84. With Turner fronting the band, they’re always lightweight, but when focusing on Turner material, they’re ok. In summation, the band is very good here. Glover is a superb bassist and holds down the bottom end like a champ. Bobby Rondinelli is a thundering drummer and fits the band like a glove. He and Glover lock in from the start and just drive the band like a freight train. Don Airey plays an extraordinary amount of Hammond organ here and it sounds fantastic. I don’t know that he’s ever played this much Hammond since. Blackmore of course delivers the kind of guitarwork that made him a legend in the 70’s and it’s always a pleasure to hear him cut loose. Whether or not you like Turner’s vocals is a personal preference. I give him credit for trying.